Bathroom refresh – getting the spa look on a budget

This is a project we have just started, so the final reveal will come in the second part, which hopefully won’t be too far away, as we want to motor through this bathroon update and move onto the next thing.

When our bathroom was fitted about 9 years ago, we opted for a corner bath because we had one little boy and another baby on the way and I imagined it would be better for bathing them together. It did work, though on the downside, in our smallish square shaped room the bath does take up a lot of the floor space.  (Also, they’re now probably just as unfashionable as the shell-edged bath that it replaced.)

As our children are tending to take more showers and less baths, we would prefer to remove the bath altogether and replace it with a large walk-in shower.  A bit controversial, but we don’t plan on moving any time soon and it would suit our family’s needs better.  Plus, further down the line, I hope we can convert our loft and include a bath in the design.  At the moment we have the funds for neither project!!!  So for now this is the dream… 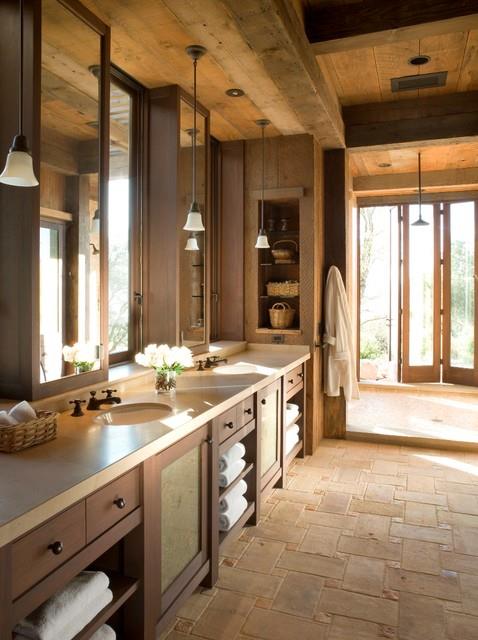 And this is the reality… 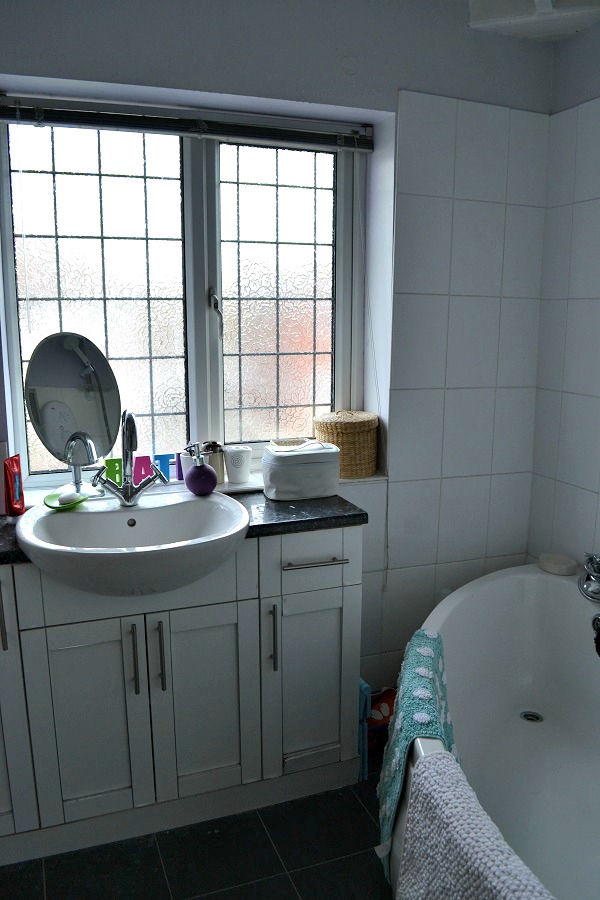 Until we can do a proper re-fit,  we desperately need to refresh this space.

Years of daily use has taken its toll and lately the space has been looking really tired.  The cupboard doors have let in water and expanded and warped, there was a shabby light fitting, the silver window blind which was ‘on trend’ a decade ago looked sad, too – the whole place has been feeling unloved and cold for a while. 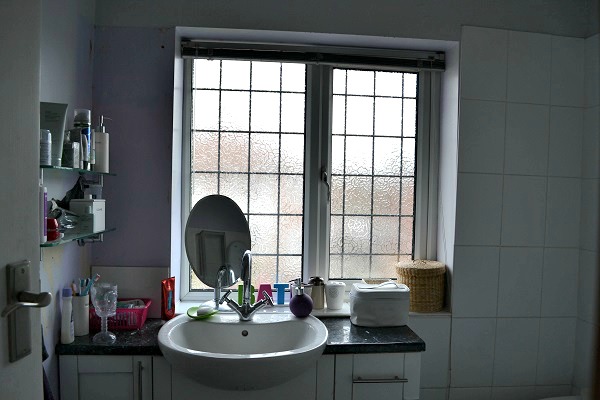 As all this is (hopefully) just a temporary facelift, we’re reluctant to spend much money on it.  Rather than replace anything major right now, we’ll keep the main fittings and just update what we can for a newer look, e.g.taps, paintwork etc.

We went to check out some replacement doors for the vanity unit earlier in the week, at a shop that specialises in just cupboard doors, only to be told they would cost £57 each.  Not even for a smart grey gloss door, like I had in mind – no, just a basic, budget MDF/melamine cupboard door.  Since we would need 4 of them, plus a drawer front, I could get a brand spanking new vanity unit and sink for the same price.  We would much rather keep our £228+ and put it towards the future shower room, than waste it on a temporary measure.

So it was back to the drawing board.  We do have some white MDF we could probably cut to size, using the old doors as a template.  But do we actually need doors at all?  I wouldn’t want a sink skirt like below (fine for a vintage looking bathroom, but not in a modern spa, which is the feel I hope to give the room)… 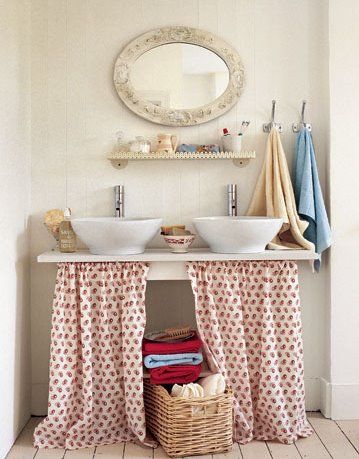 However I do think an open vanity unit could work… 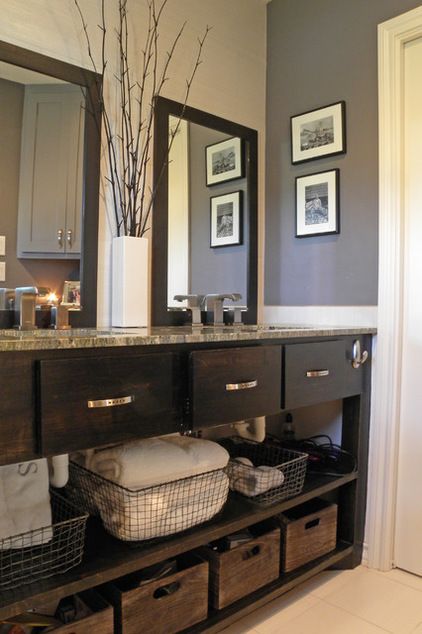 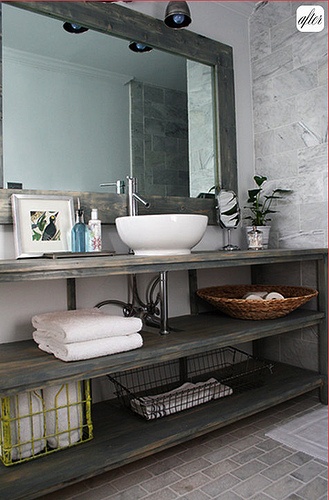 Definitely more spa-like, oh yeah!  And because we’re not spending over £200 on new doors, I can splurge a little on some nice wire and wicker baskets, right?  And fluffy towels, scented candles etc etc.

So I’m feeling quite excited about this project now, to see what we can achieve on a shoestring.  My father-in-law is an electrician and has fitted a new light for us (£30 from B&Q). 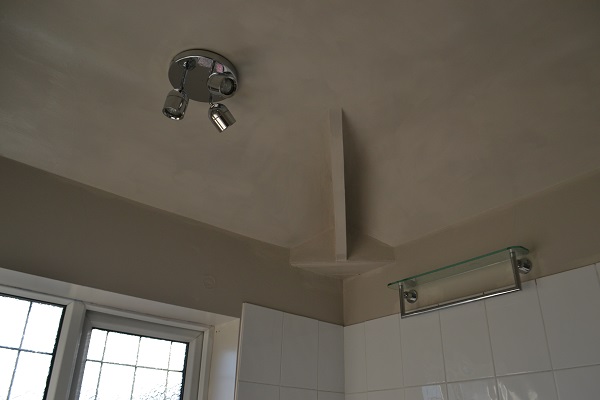 We’ve painted the walls a warmer tone (the previous colour was a cool lilac).  This B&Q shade called ‘Alfie’ (£17.98) is quite a modern ‘greige’ – a bit like putty – and we’ve done the ceiling as well as the walls which gives a cosier feel than a white ceiling would. 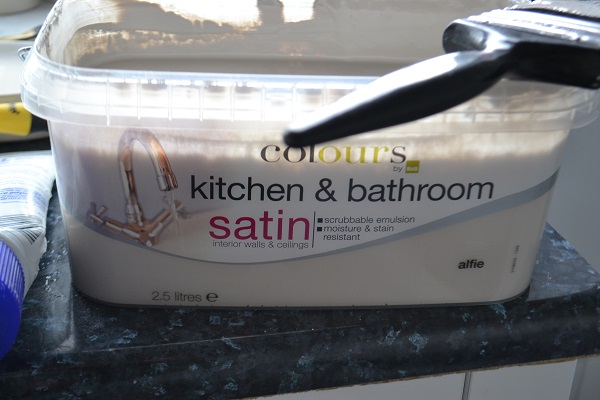 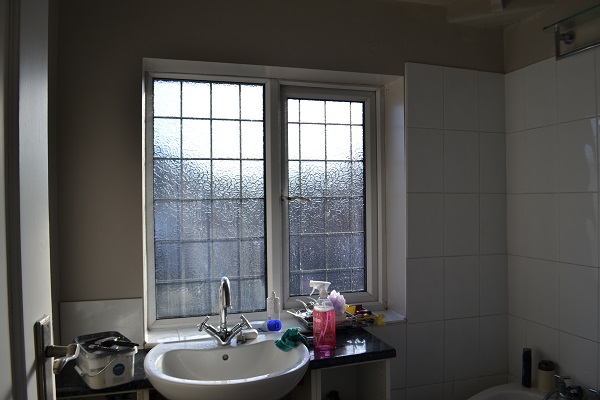 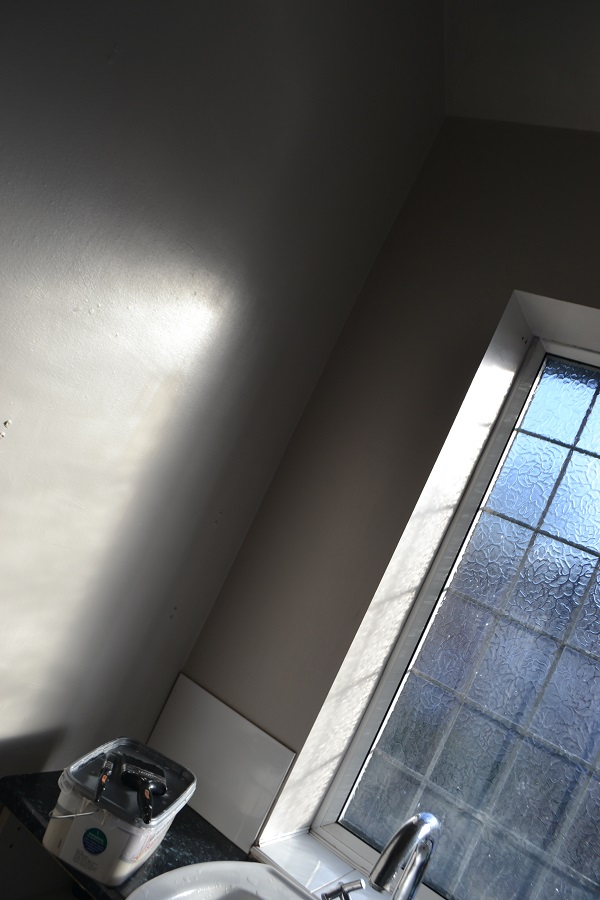 I priced up a heated towel rail as they obviously look nicer than a radiator, however I’ve been reading reviews online and lots of people say don’t get rid of your radiator, as a towel rail won’t heat the room adequately.  So for now I think we’ll keep the rad and give it a fresh coat of paint.  If anyone has any thoughts on this, feel free to chip in – also on the open vanity idea, whether you like it or hate it.

I’ve got some cute little details planned such as individual towel hooks for the boys and maybe doing something different inside the open cupboards, so watch this space.  Oh and if you have been wondering where our loo is (of course you have!) it’s across the landing  –  yet another makeover-in-waiting (how can such a modest house continually need work?). 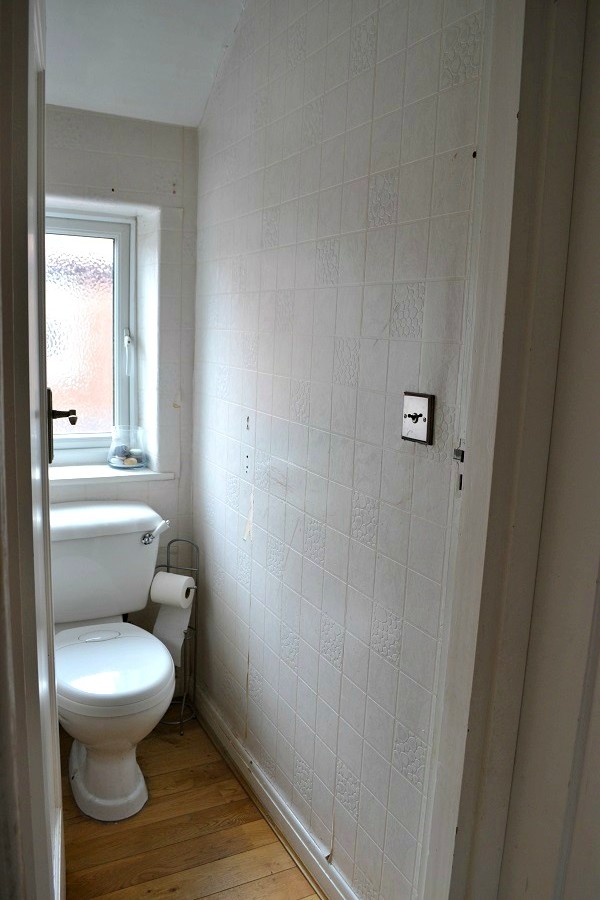 This tiny cubicle will be addressed in a future post sometime after the bathroom is finished.  I would really like to give it some ‘board and batten’ treatment, it’s all over pinterest via mostly American blogs and I think it looks great in hallways as well as bathrooms. 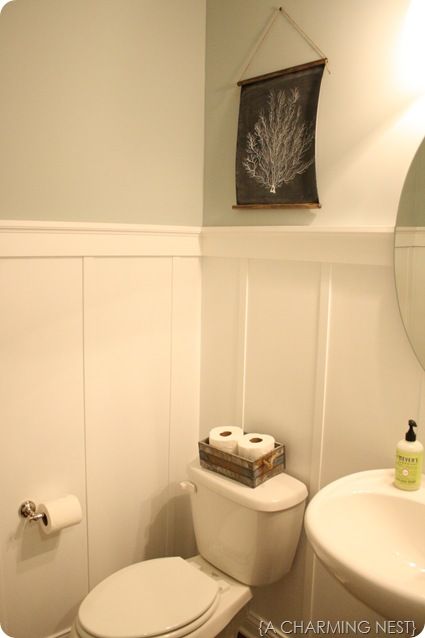 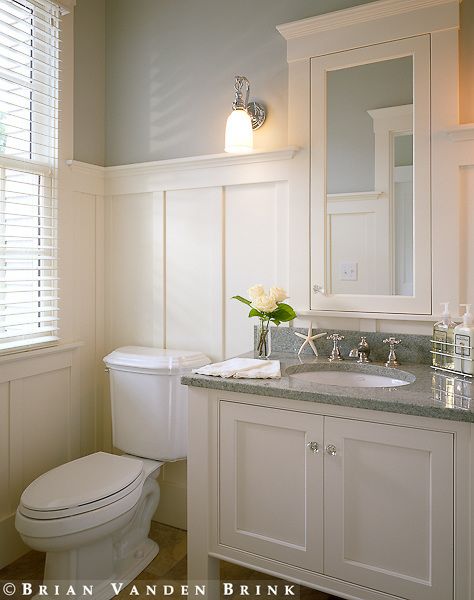 Really fresh and clean looking, but hubby can’t see the point as he thinks the boys will just pee all over it!  Ha ha, that’s a nice thought to leave you with… but he’s probably right.