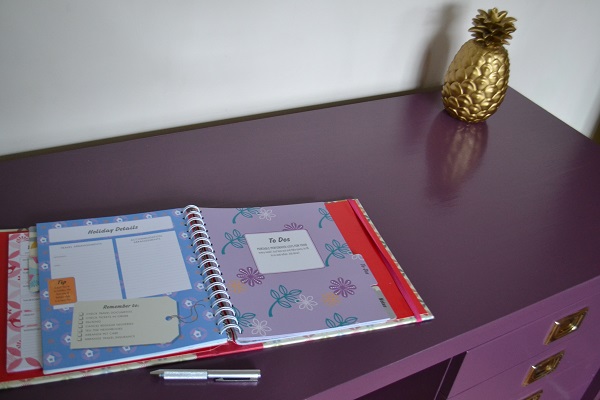 I fancied painting something this bank holiday weekend as I’ve not made-over any furniture in ages and the pine desk I’d previously painted for my son, Alex was looking a bit scuff-marked.

If you have been following here for a while, you may remember I turned it from an original orangey pine into a red desk with white handles for his bedroom.  Over time, we found he wasn’t using it as much as I had expected, so eventually we brought it downstairs to put our PC on.  Since we just got some new curtains in our front room, it has spurred me on to give the rest of the space a bit of attention.  It is probably my favourite room in the house because of its bay window, but it is a bit of a hotchpotch; part office/part playroom.  But it has a two seater leather sofa and a nice fireplace, so I’d love it to work as a playroom for the boys but with sufficient lidded and drawer storage to can conceal all the boys’ stuff in the evenings when it can become a tidy and calm haven to relax in.  That’s the plan anyhow!

Back to the desk, I couldn’t be bothered going out to buy any paint so decided I’d just use whatever I found in our paint storage box.  There was a tin of deepish purple eggshell I’d never opened.  It was one of those bargain pots discontinued at Homebase and reduced to 50p – bargain!

So purple it was to be… 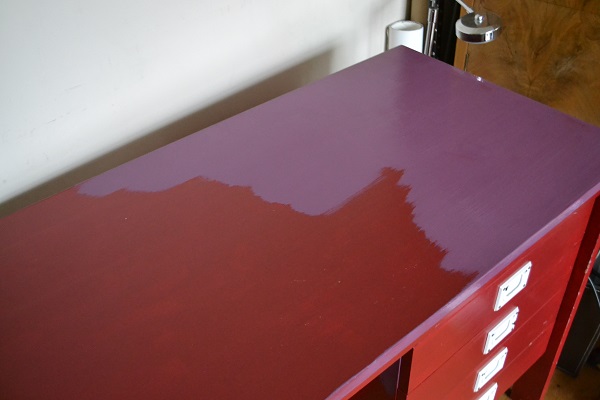 And since gold accessories have become a really big thing in interiors, I decided I would scrape off the white spray paint I’d put on the handles previously.  It was starting to flake off anyway. 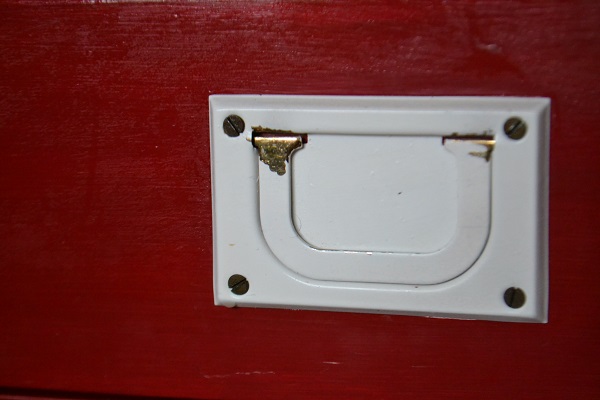 But the non-flaky bits didn’t scrape off easily and I was starting to scratch the metal in trying.  A quick ‘google’ and I read that soaking the metal handles in vinegar for 24 hours would soften the paint, so that’s what I did. 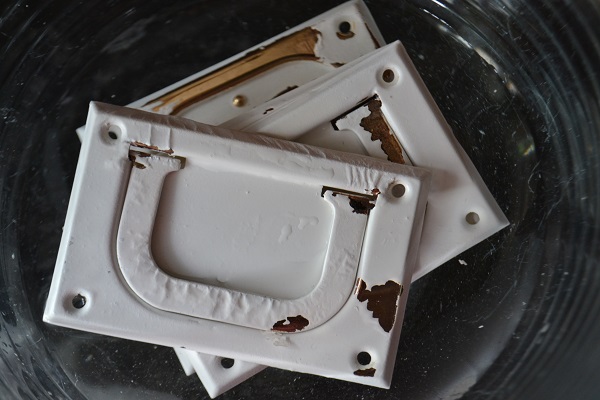 You can see how the paint has bubbled by the next day, so it mostly peeled off and the bits that didn’t, I just scrubbed a little with a scouring pad.  Twenty minutes or so later the handles were more or less back to their original finish, a bit tarnished, but I will try some brasso on them at a later date. 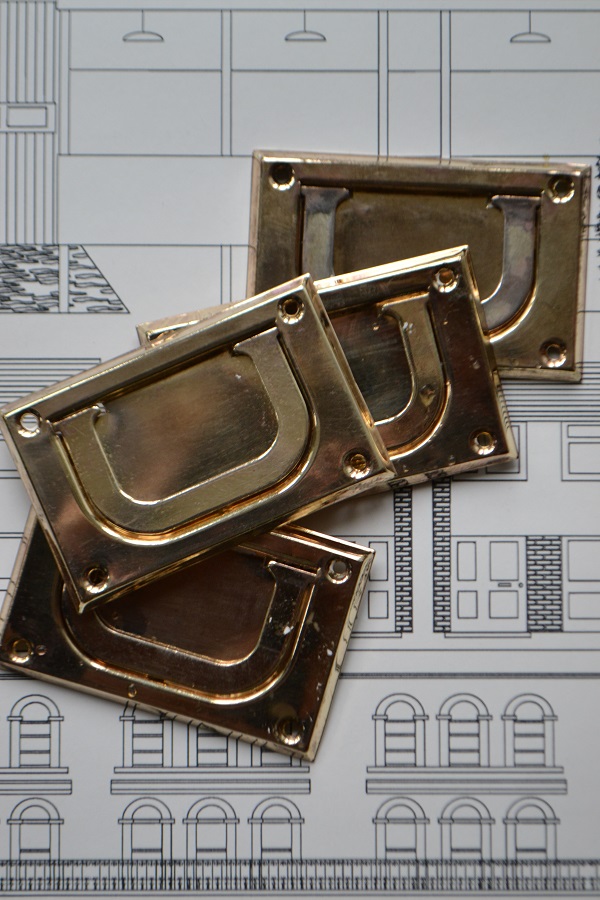 I’d given the desk one coat of purple and let it dry over night, using the old ‘cling film round the paintbrush trick’ to stop it drying out and thus avoiding having to wash it. 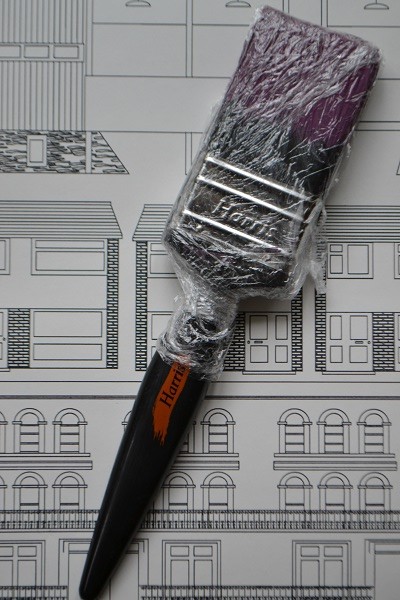 As you can see one coat certainly wasn’t enough, it was still pretty reddish in parts, so I set to work with coat number two. 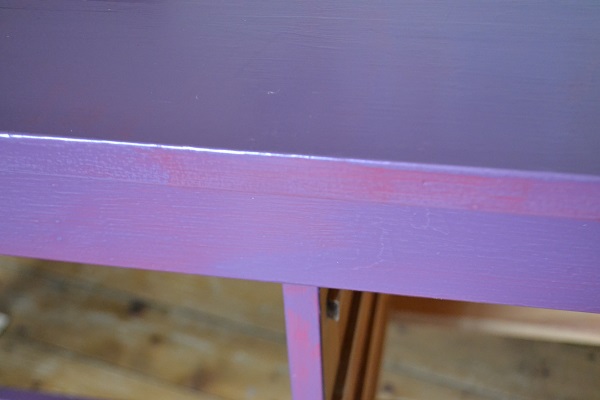 Second coat went on and I have to say although the colour may appear to be like an alarming shade of violet, in actual fact it is more of a muted aubergine/mulberry tone.  The camera just doesn’t seem to have captured it correctly and it looks much brighter in the pictures than in real life, which is a shame! 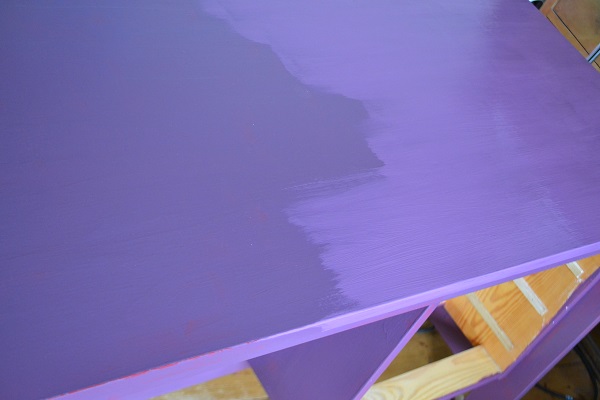 The next photo shows it a bit closer to its actual colour, once a second coat had gone on and dried: 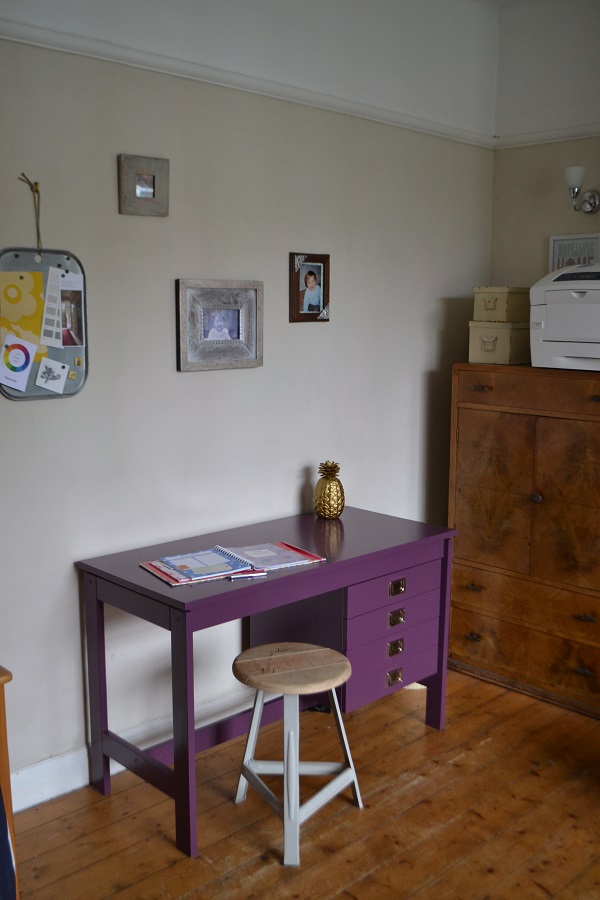 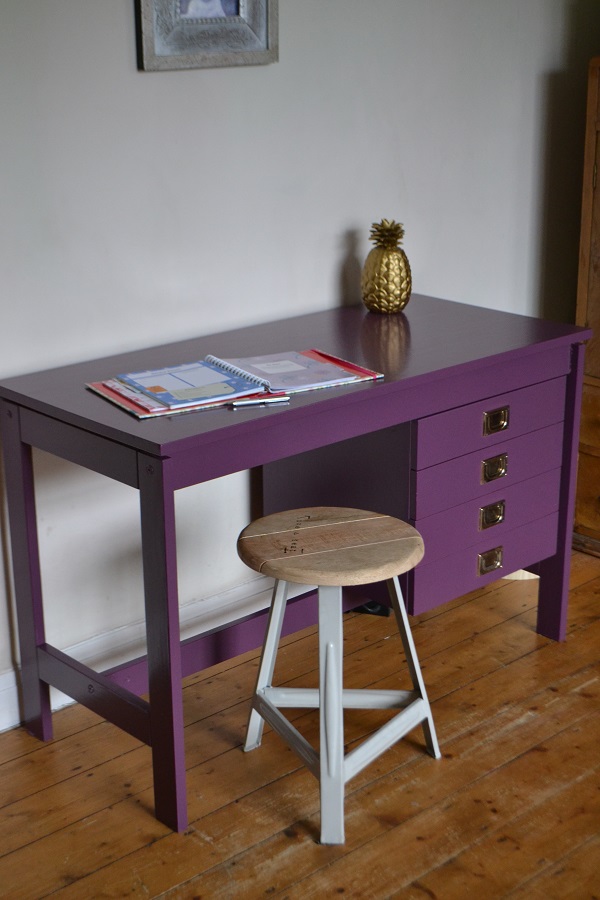 What do you think of the colour and the handles? 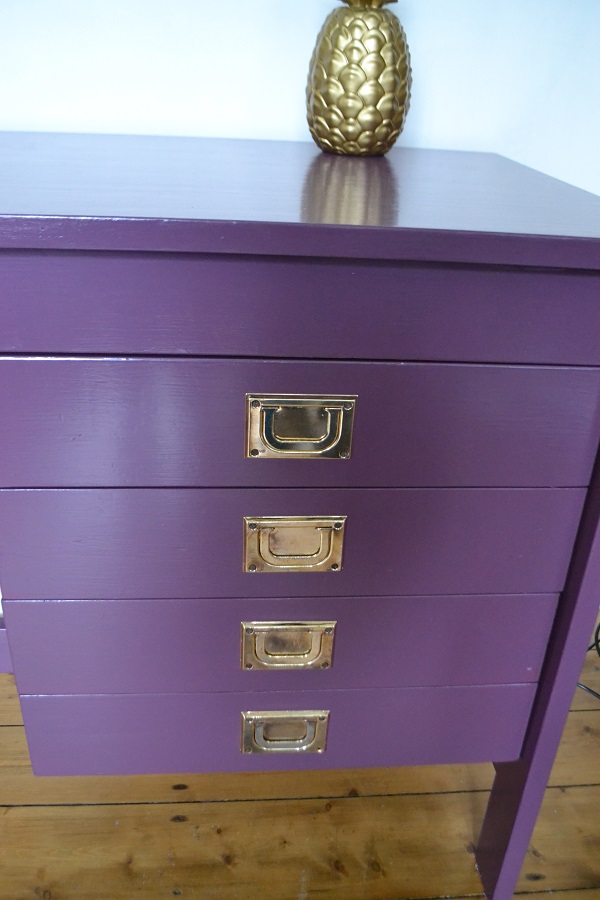 And the gold pineapple, doesn’t everyone need one in their life?!  This one was a great buy from Asda. 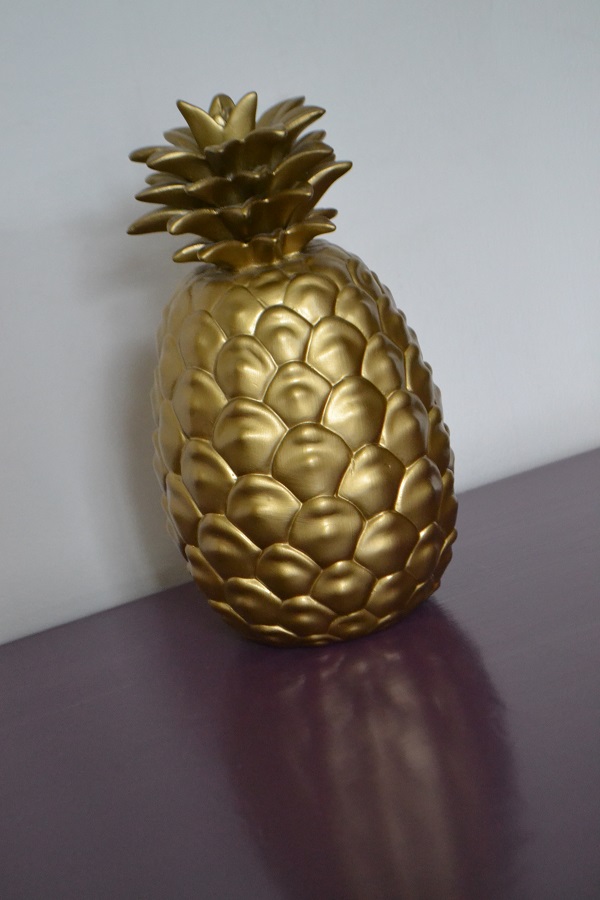 I dug out some inexpensive frames I had (one from TK Maxx, one from a holiday in Portugal and the other from a church sale) and popped in a photo of each of my three boys as a baby. 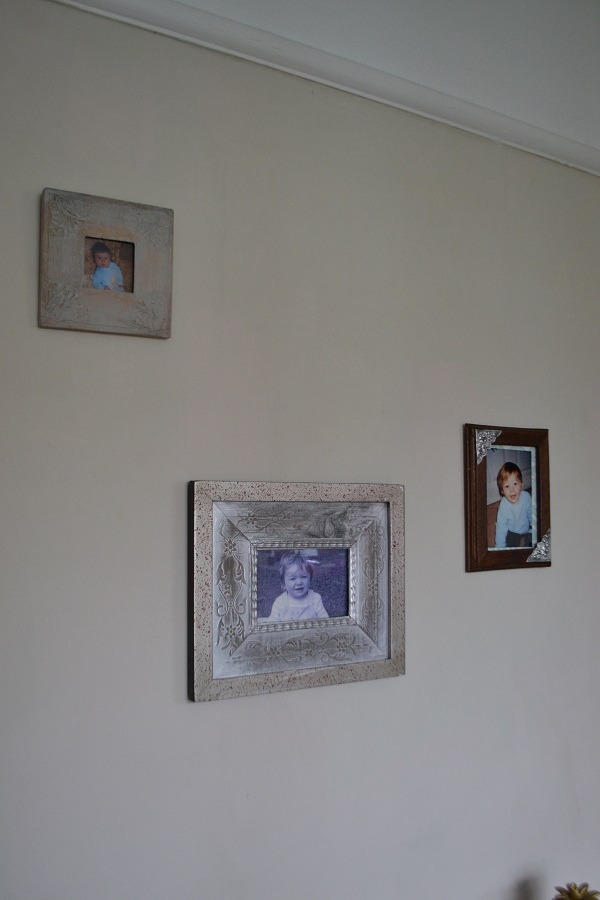 As you can see below, we already have some purple in the room!  The chimney breast is a perfect match (not planned and not the same paint, just coincidence).  I am intending to change the chimney breast colour eventually as I am ready for something lighter and fresher. 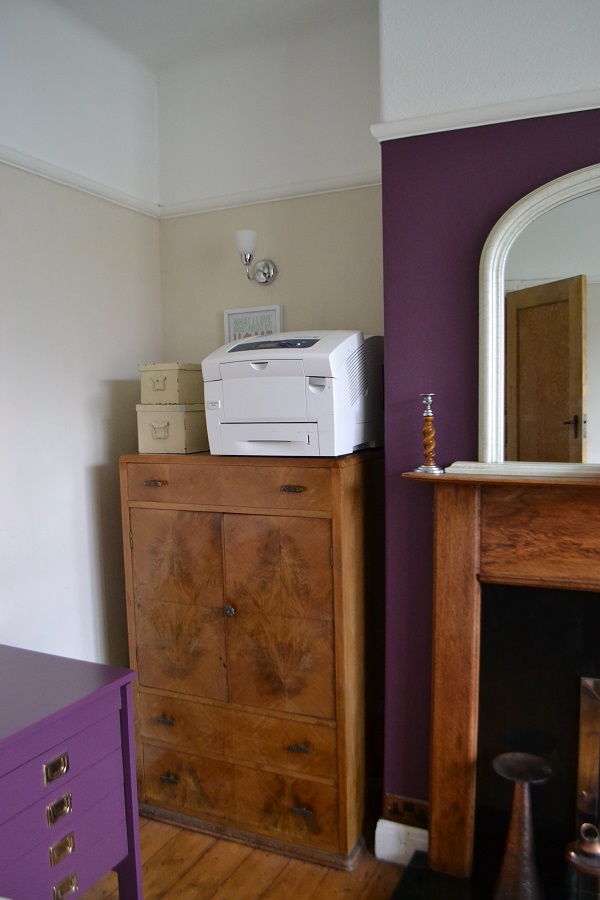 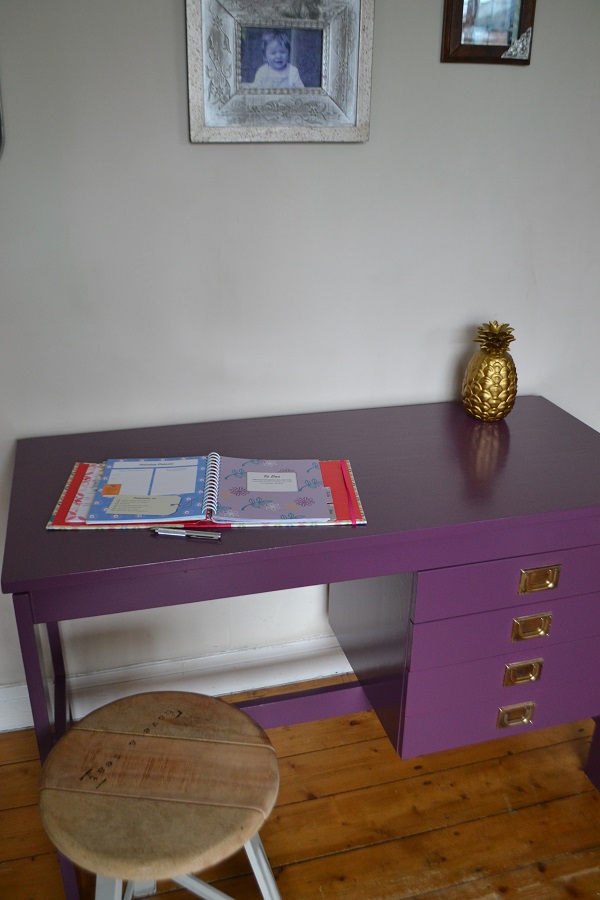 Has anyone else taken out a paintbrush this weekend?  I’d love to know what projects others have been up to…