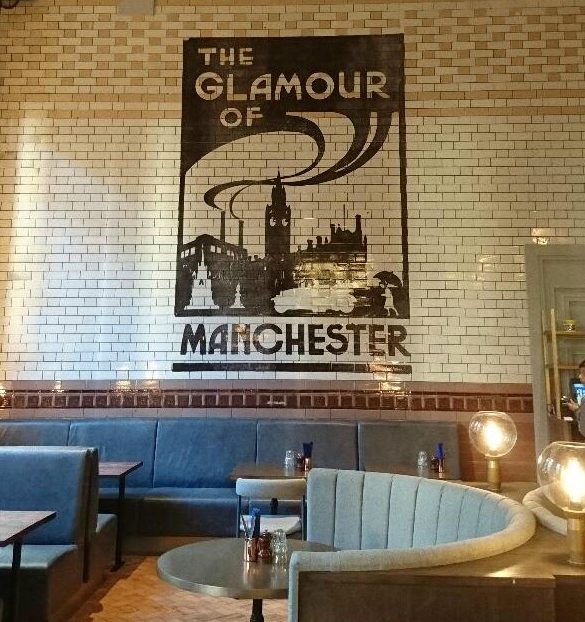 Principal Manchester Hotel: A Glimpse into the Past & Future

I’m not usually one for period dramas (I’ve never watched an episode of Downton Abbey!) but I have tuned into The Halcyon recently to see how the TV people would recreate a 5-star hotel in wartime London.  The hotel exterior is actually the Land Registry Building in London, while quite surprisingly the hotel interior is all – apart from the restaurant – a huge and impressive set.  From the big lobby and staircase to the very vintage corridors where the staff walk and talk.

I think they’ve done a good job, it looks authentic, but what a shame we can’t visit!

Luckily for me, there is a wonderful real old hotel practically on my doorstep, with all that lovely history and character we crave.  It is an interior design bloggers dream and my only regret is that I didn’t take my proper camera, just my phone – still, I hope the pictures give you a good idea about the grandeur of the place.

Called The Principal Manchester, it was formerly the Palace Hotel and many years prior to that the Refuge Assurance company.  The huge red brick building features an imposing clock tower with a Manchester Bee design on the face (the bee is a recurring symbol  around Manchester, as a reminder of the city’s industrial origins, signifying of course the worker bee).  The emblem can be found again on the mirror in this private dining room within the hotel: 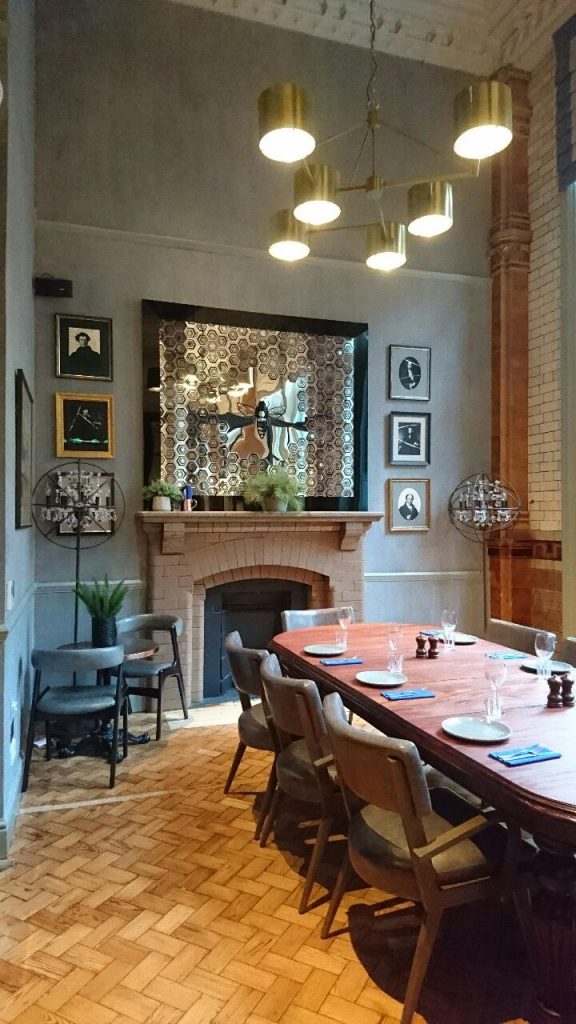 The Grade II Listed Refuge Building was constructed over a period of time from 1891 to 1932.  Above the lobby is a huge domed glass roof which came from a train station in Scotland when the building became a hotel. 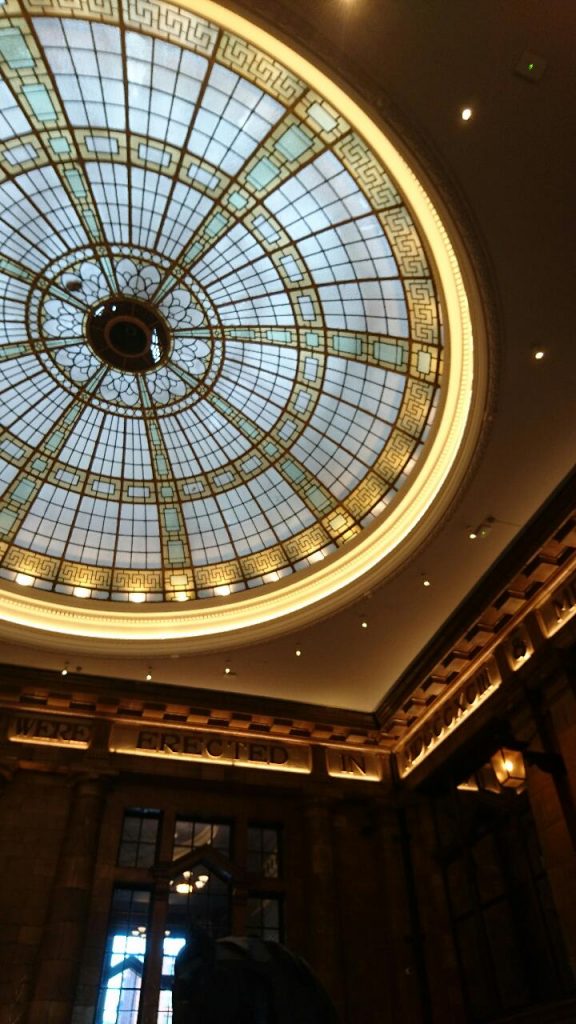 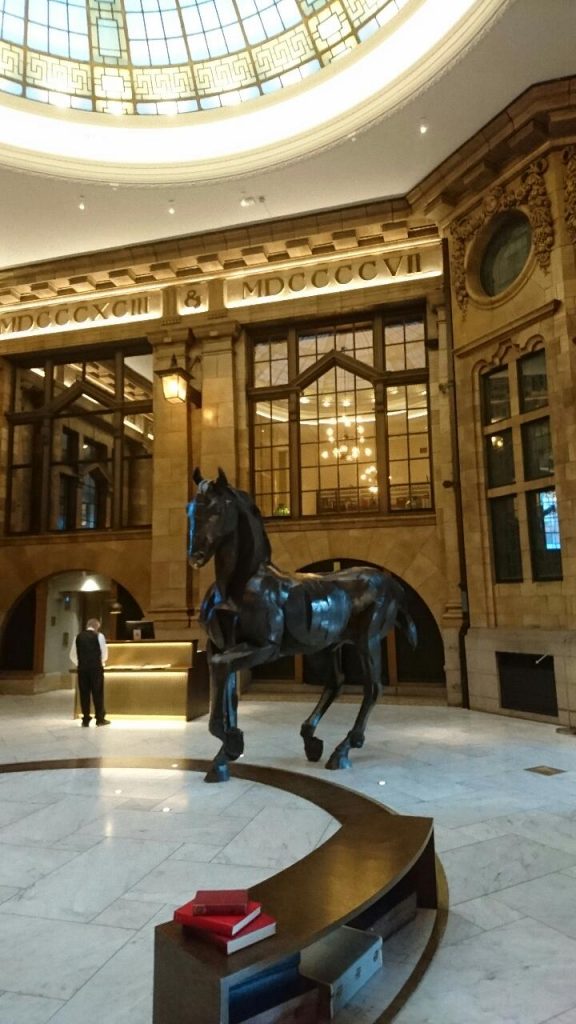 Having recently undergone a multi-million pound renovation, I was excited to meet up at the hotel with some of my local blogger friends (Old Fashioned Susie, Swoon Worthy, Karen Barlow, Well I Guess this is Growing Up) for lunch and a little look-see.

There is a stunning new bar and restaurant called The Refuge by Volta. 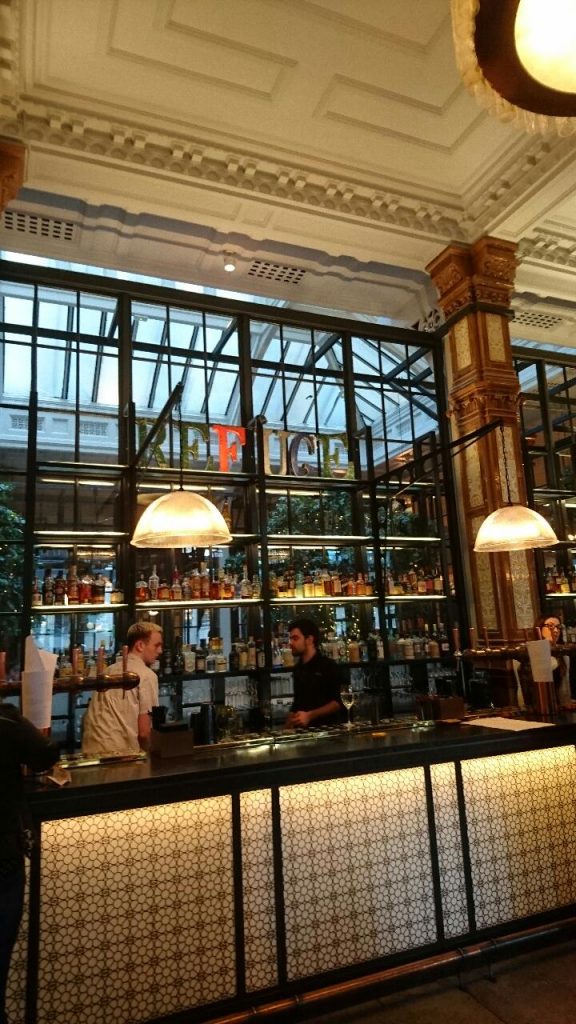 This gorgeous area is known as the Winter Garden and features that glass roof, Critall style windows and doors, twinkling lights wrapped around trees, plus an incredible tiled floor and eclectic seating – seriously, what’s not to love?  There are plans for afternoon tea to be served here which I think is a must! 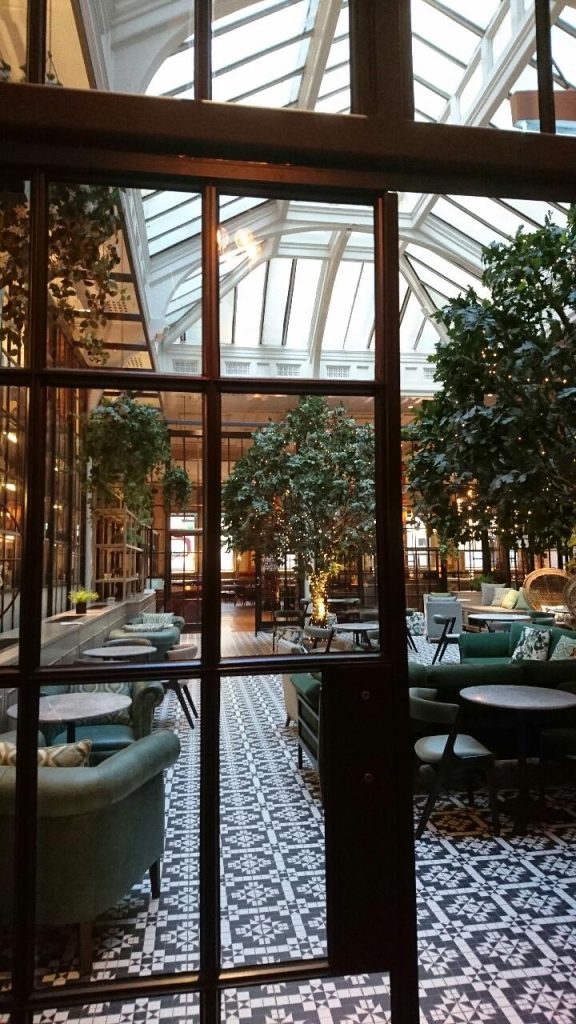 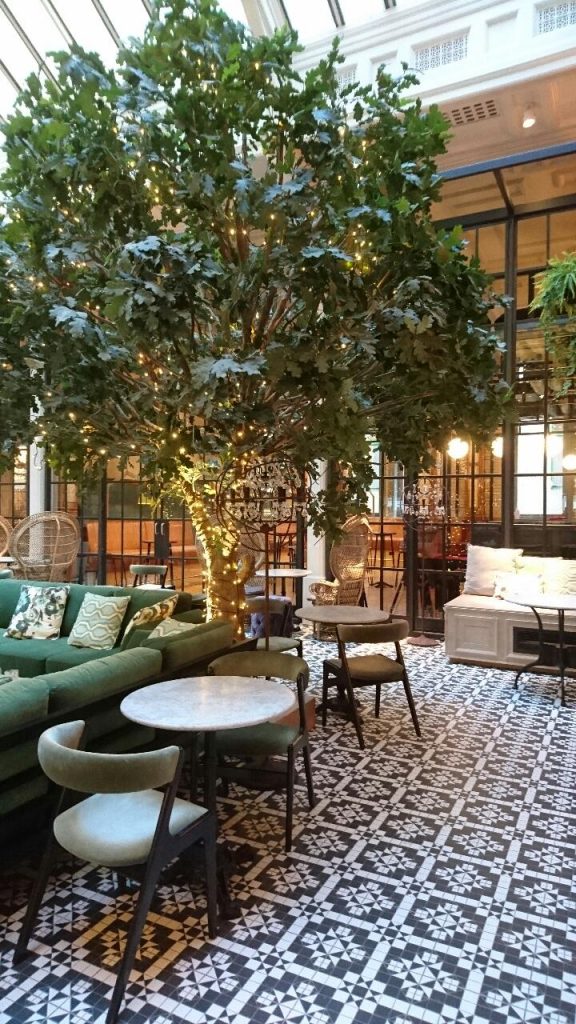 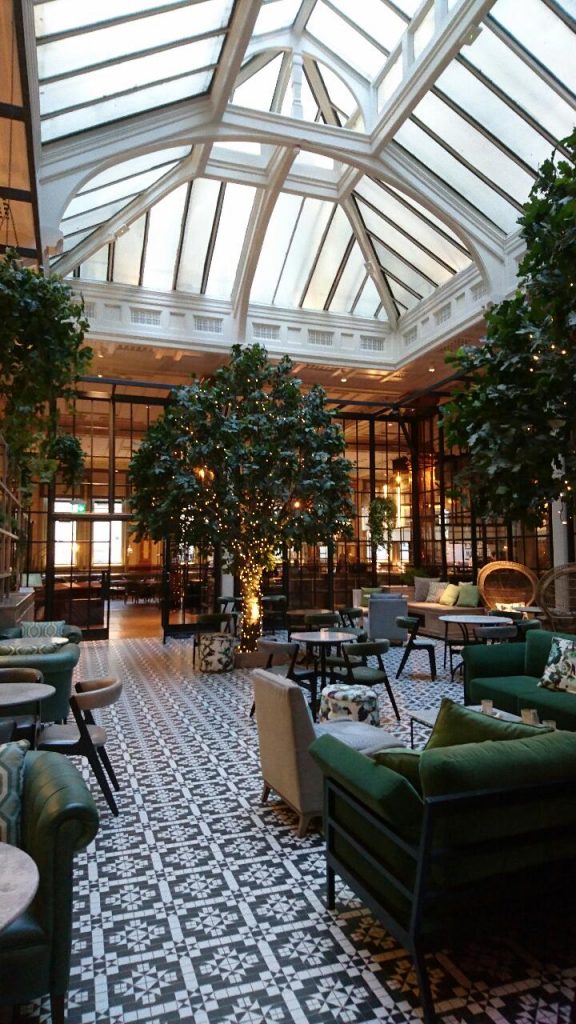 It certainly got us swooning and our cameras (or phones) clicking.

We were able to see a couple of the bedrooms while we were there – check out the tiled wall beside the window in this room: 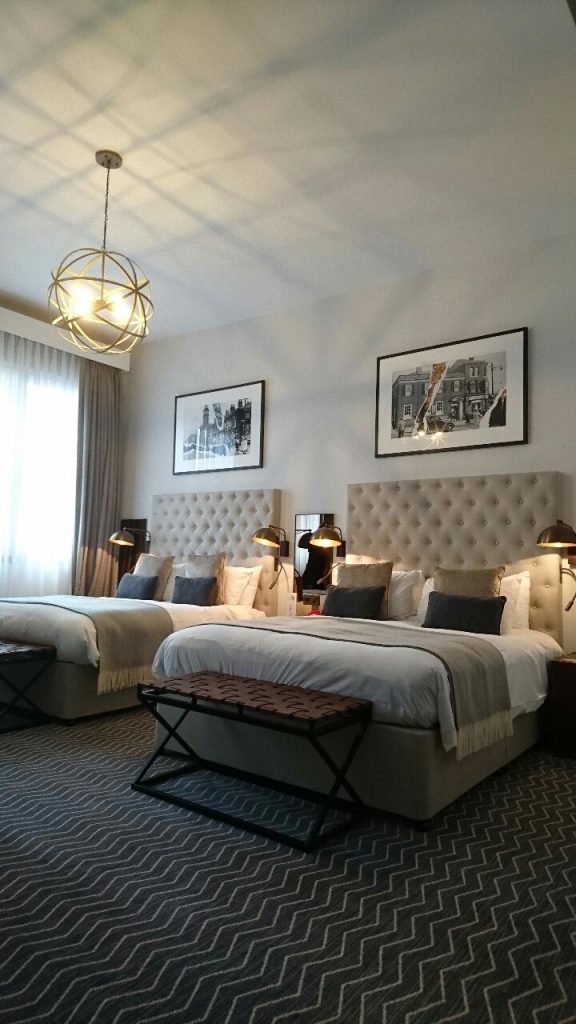 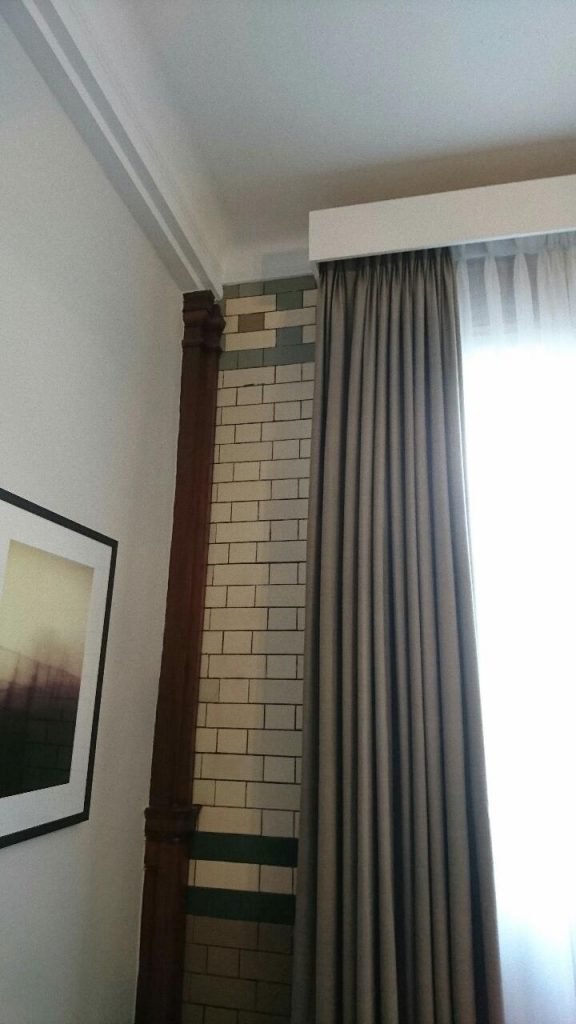 The bathrooms have been given a chic vintage style: 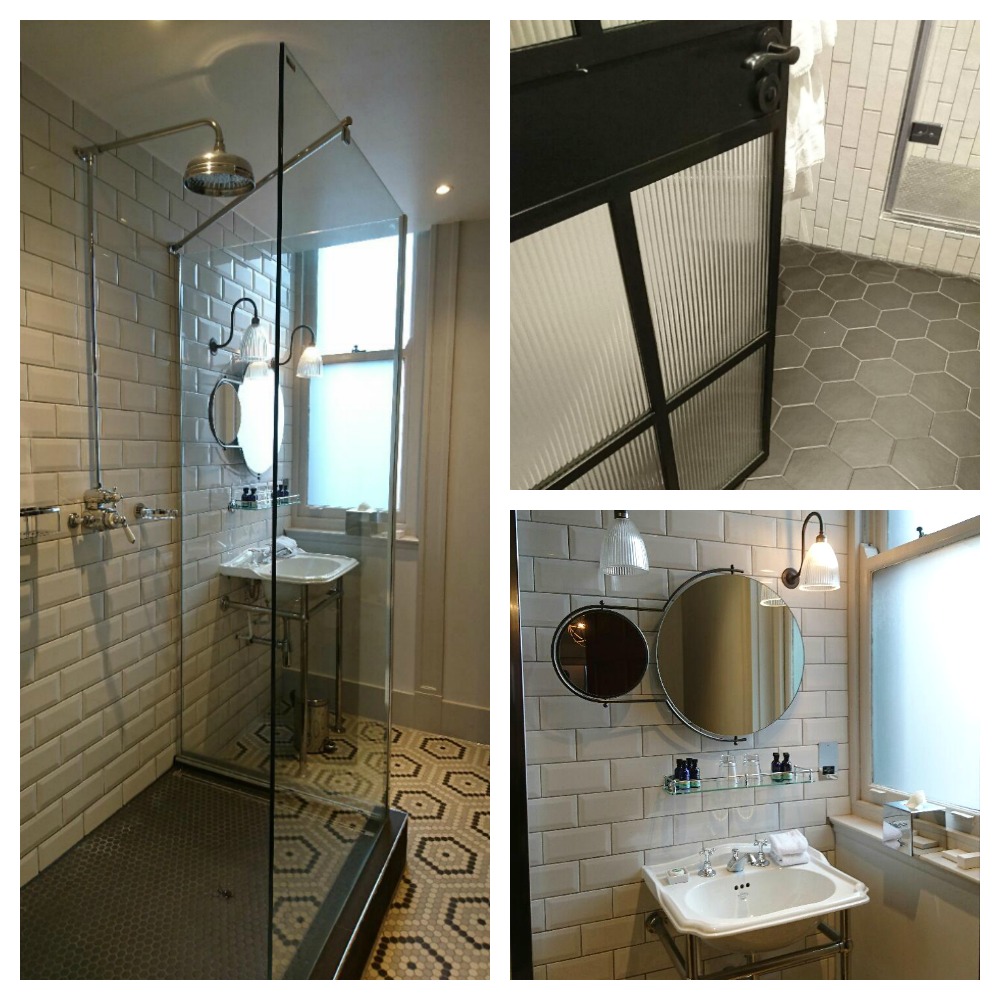 Here’s another bedroom, part of a suite where the living area had a fab quirky drinks cabinet and tea/coffee station in a giant vintage suitcase: 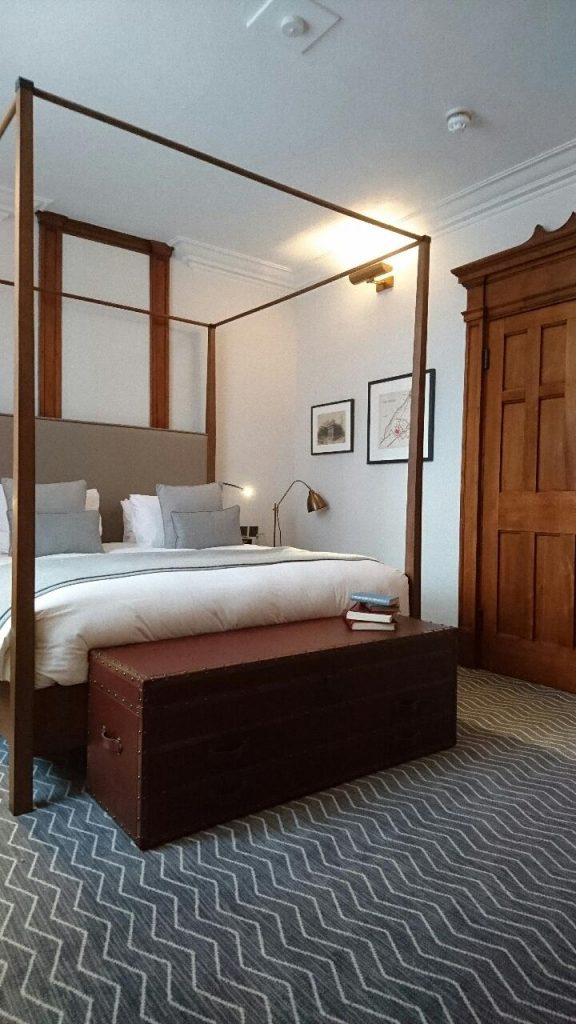 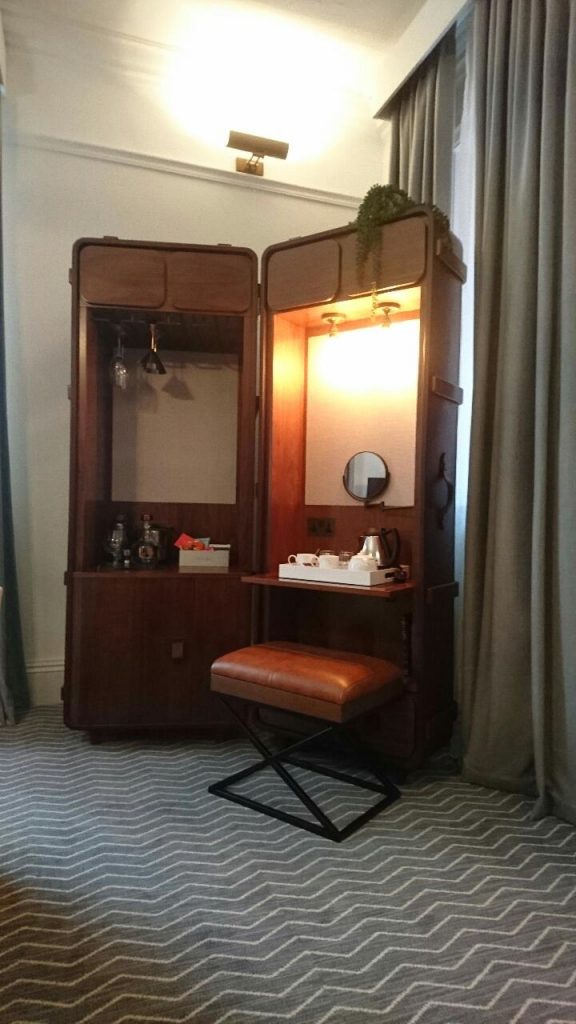 More vintage tiles could be found throughout the spacious hotel as well as lovely stained glass windows, chandeliers etc. 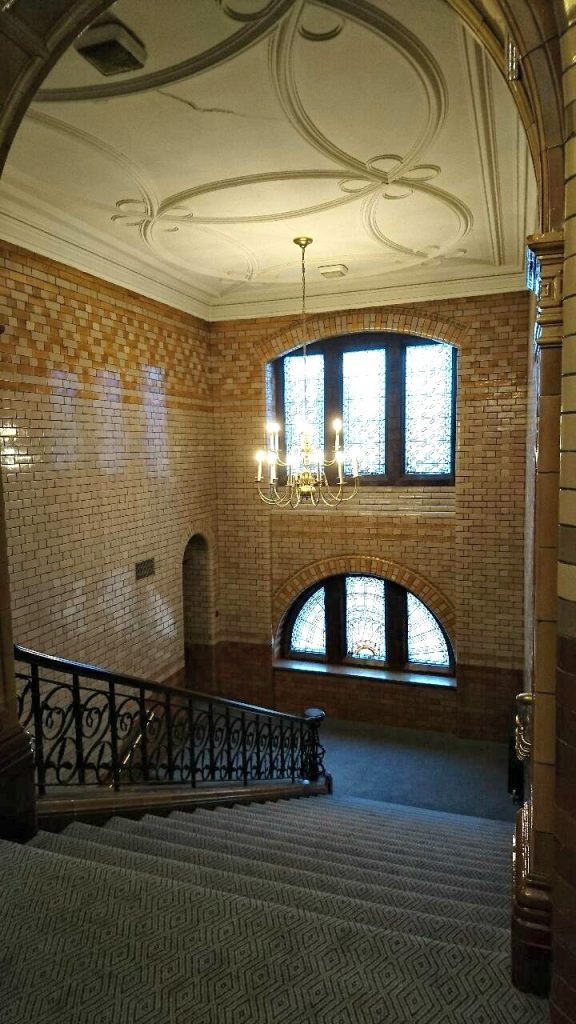 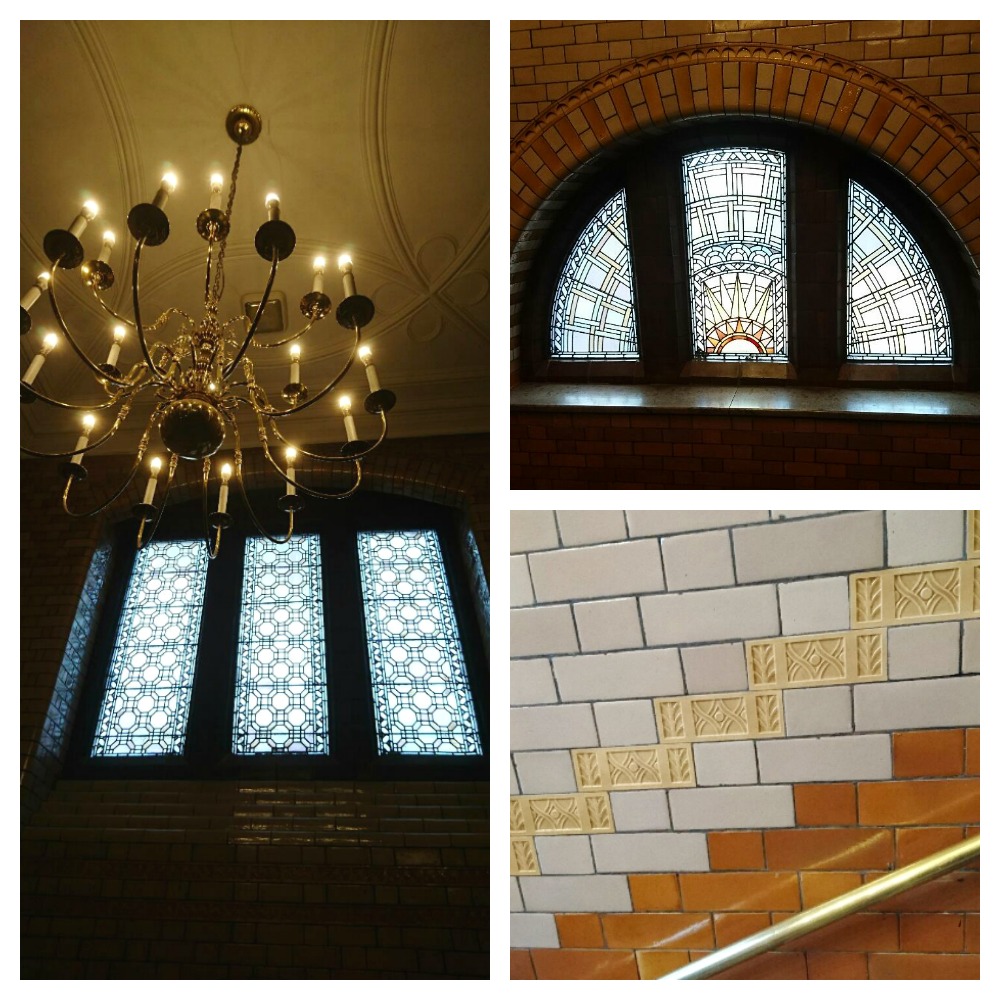 Outside there is a light festooned courtyard which would make a brilliant party space, there’s a snug too with football tables that can be hired for parties.  Although we didn’t sneak a peek this time, down in the basement there’s a huge ballroom and old vaults.

Finally, this amazing old marble and bronze staircase which was only accessible to men in the past!  It is rumoured to be haunted by the ghost of a heartbroken wife who threw herself down the stairwell.  Is that what caused the mysterious dent?  Intriguing…  (There is another idea though that a bathtub may have been dropped accidentally during the hotel’s conversion, but who am I to let a plausible theory spoil a good ghost story!) 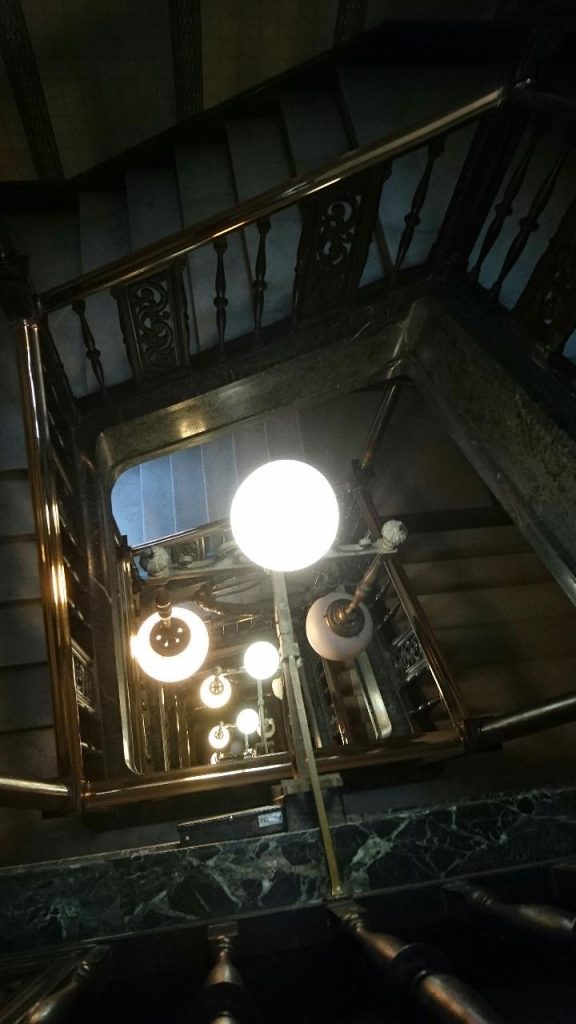 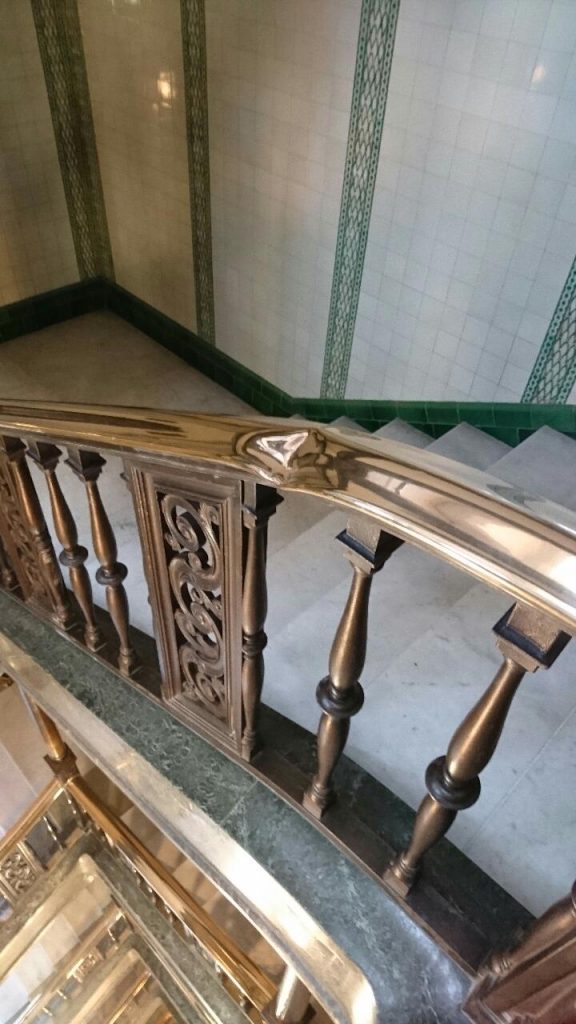 I would definitely urge you to visit this fabulous venue if you are in Manchester anytime.  You can hop off the tram at nearby St Peter’s Square or take a train to the Oxford Road station which is literally a minute or two away from the hotel’s entrance. 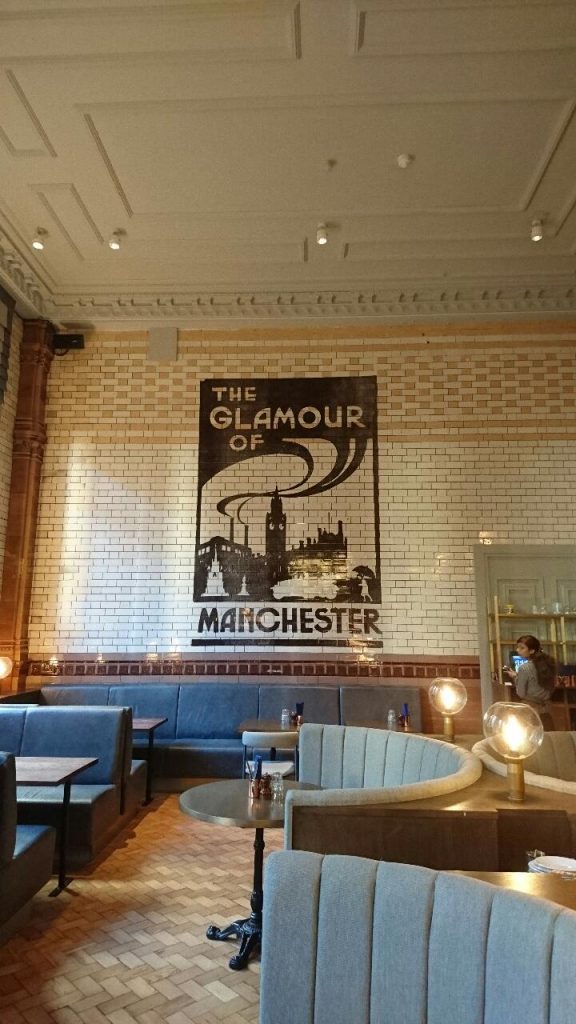