I’ve been really excited to take part in a bloggers project recently, organised by Waltons – suppliers of a range of garden sheds, summer houses and playhouses.

Waltons very kindly supplied me and four fellow bloggers with a brand new 6’ 5 x 5’ 6 Walton’s Honeypot Honeysuckle Playhouse to paint and style it any way we chose, spending no more than £50 of our own budget on it – the idea being to keep it as thrifty as possible, making use of things we already had.

The kit arrived and my youngest two boys were really excited to watch and help their dad build the playhouse. 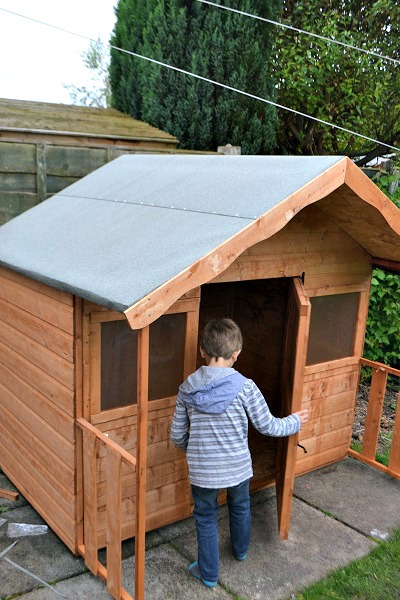 It was my husband’s idea to add the decking – it kind of made a little front porch.  That was the most expensive item, it was £16 for the deck boards, but money well spent I think! 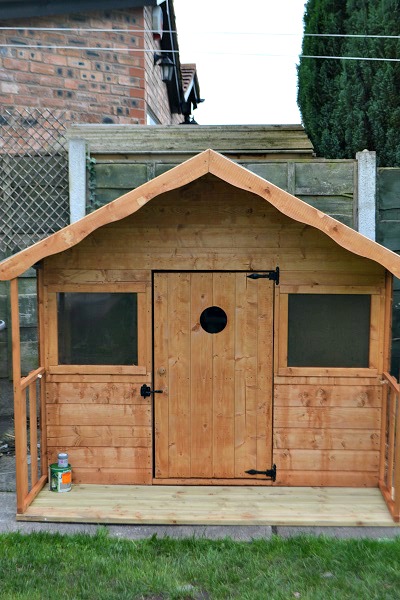 Especially as I was saving by already having some paint in the shed – I’d bought the Cuprinol tin ages ago as it was such a bargain and I knew it would come in handy one day!  The little tester pot was a free sample at a blog event. 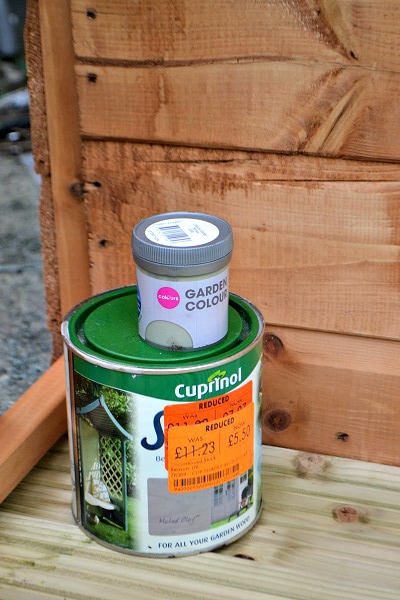 So we got busy with the paint – the main colour is called Muted Clay and its a nice, soft stone shade. 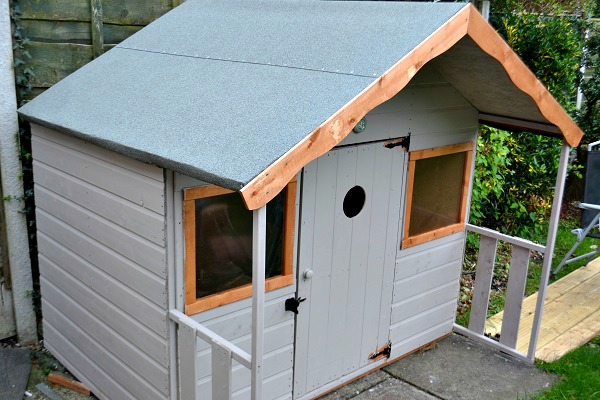 The main challenge for me was keeping the playhouse boyish.  It’s a very sweet style, so I deliberately left off the embellishments provided which were a flower shape to go round the circle in the door and some window trims that would normally go inside to give a cottage effect.  Keeping the boyish theme in mind, I wanted to introduce a camouflage pattern, but not cover the whole house in it as I think that would have been too much.  We weren’t after an army base look, more of a ‘woodland hideout’ where the boys could be explorers, adventurers or even spies on secret missions.  This playhouse is directly outside our kitchen so I wanted to keep it mostly neutral, and so the idea came to add just a camouflage edge to the window frames and decorative trim.

You could draw out a camouflage pattern or use a template, but I decided to just go for it free-hand, figuring I could paint over it if it went a bit wrong!  I started with the neutral shades of stone and green first and painted some wiggly cloud shapes. 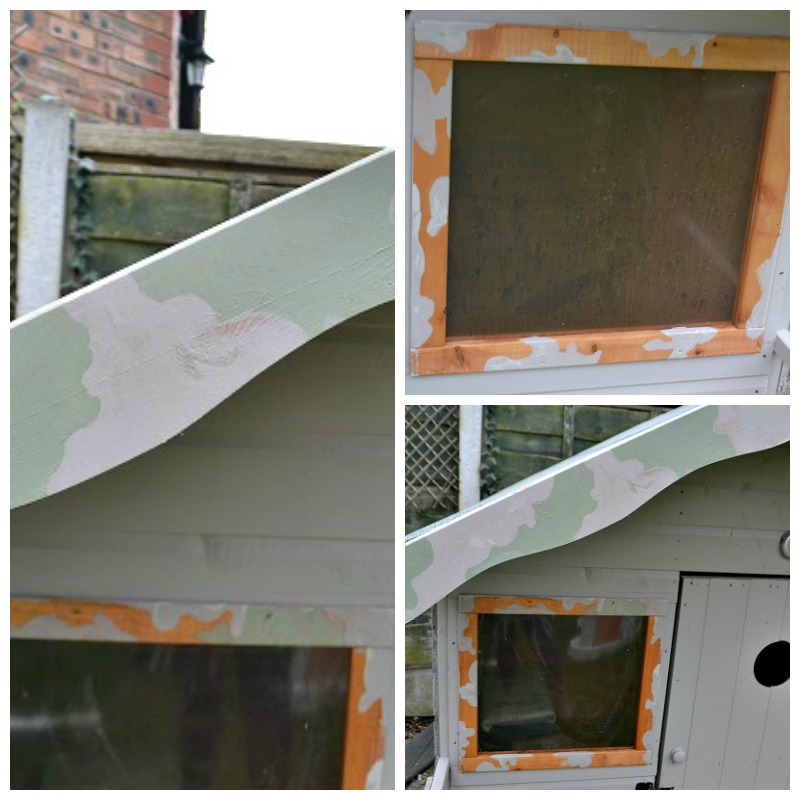 Next I took a finer brush and a dark navy-black paint (again, a paint I already had).  I took a bit more time and care with this part!

That darker colour definitely helped make the pattern look less like clouds and more like a camouflage print. 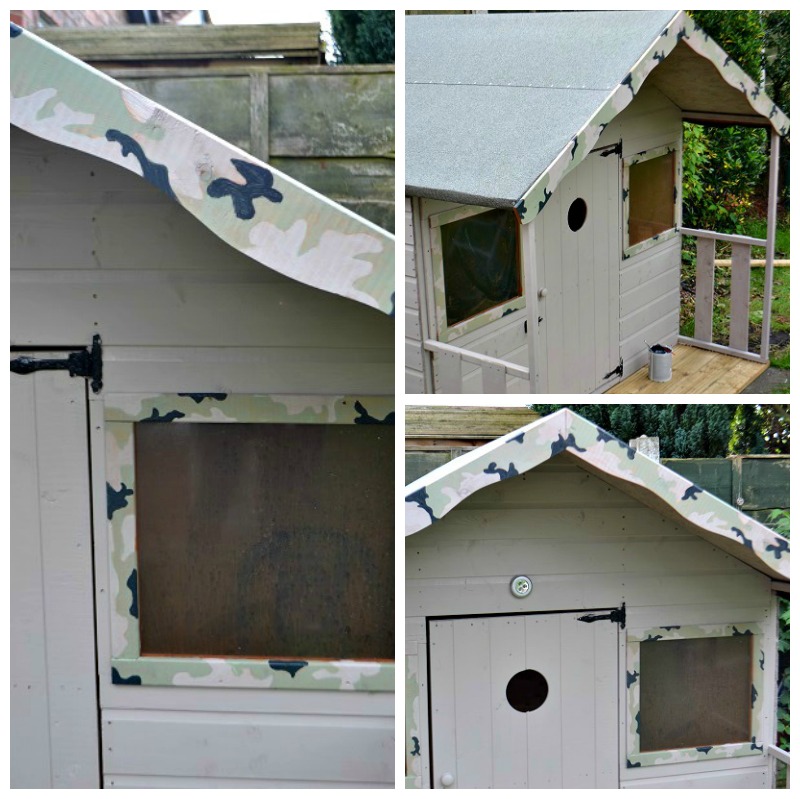 I then peeled off the protective film from inside and out of the windows and cut up an old pair of cargo trousers that became blinds which we could tie up with ribbon when the boys didn’t want their play den too dark – but when they’re hiding out, the blinds can easily be lowered.  They are just stuck to the window frame with velcro strips.  A couple of hooks were added for hanging up essentials such as backpacks and a basket for torches, sunglasses, walkie talkies etc.  We bought a couple of push in battery lights which were about £4 again from B&M – one for outside the playhouse and one for the inside. 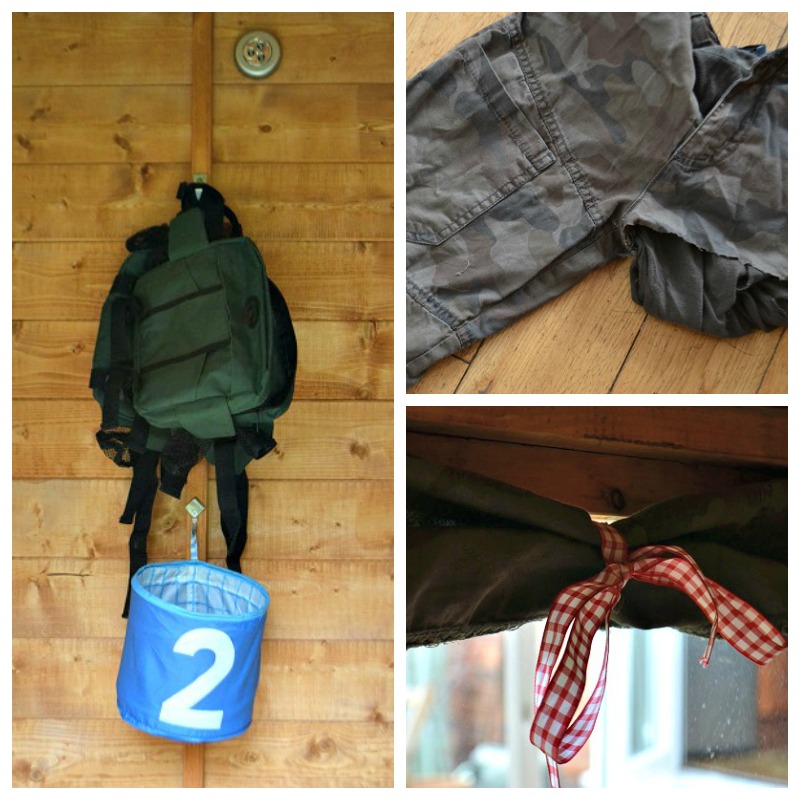 I painted one of the panels inside with blackboard paint so they could draw maps and plan out their imaginery adventure routes and we added a sleeping bag for when they need a rest from all their exploring! 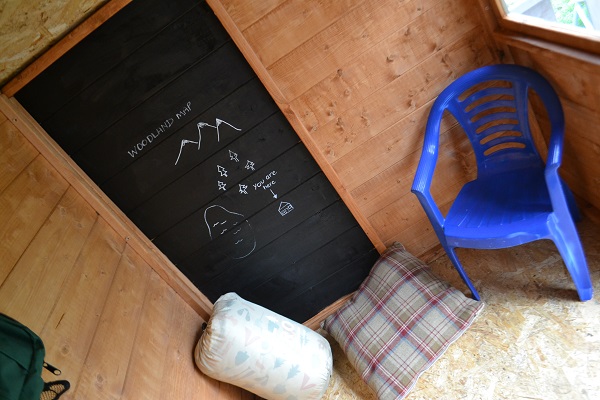 We also added a handy little storage box from B&M bargains which is also a seat.  It was only £4.99 and they can pop more toys and accessories inside to keep the house tidy. 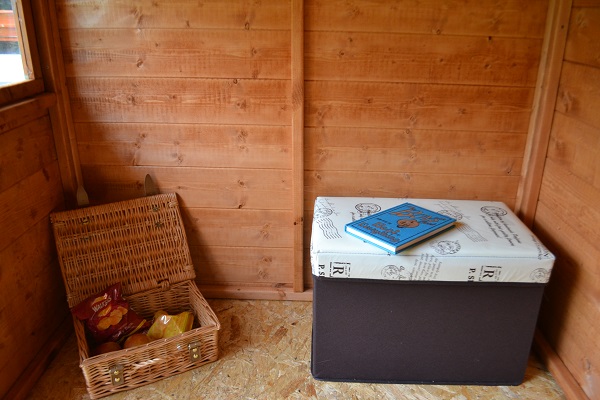 So here’s the finished playhouse – it’s a Woodland Hideaway/Den I guess you would call it! 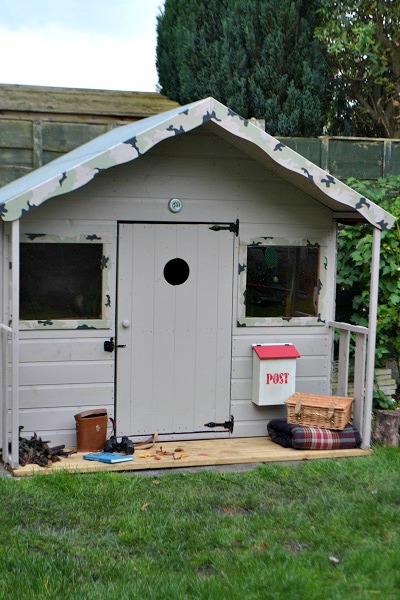 A picnic blanket and basket were essentials for snacks!  And the post box we already had, I thought it was a cute way to leave notes and clues for each other to follow. 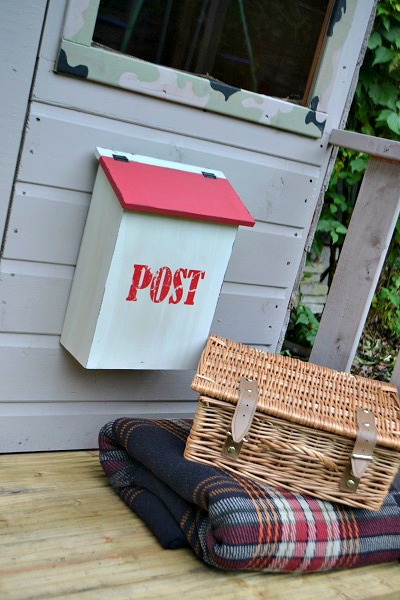 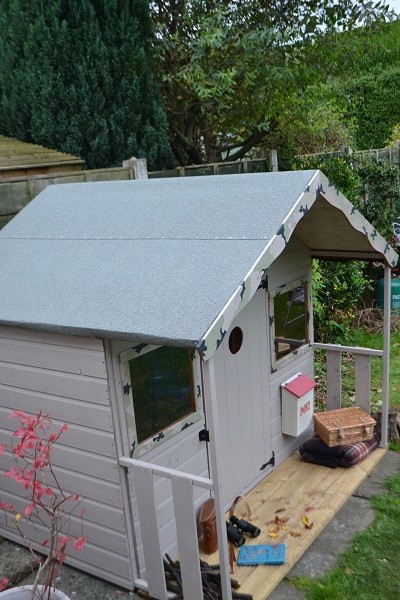 Our total spend for finishing the project was £25, so I’m happy with that.  I hope you like what we did with our playhouse, it has been really great fun coming up with our design!  Thanks to Waltons for the opportunity to do something so creative and rewarding. 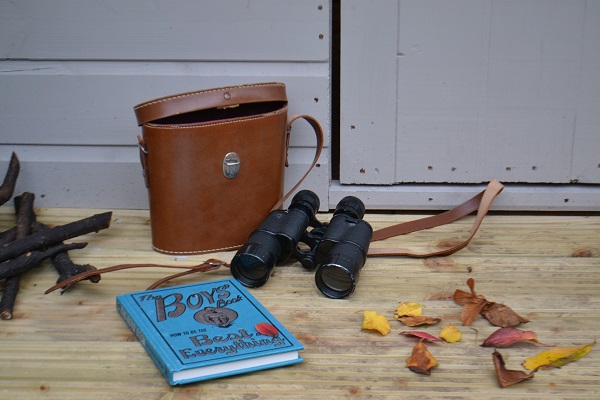 6 Home Improvements That Can Spruce Up Your Home

How to Choose the Right Fireplace for your Home

This website uses cookies to improve your experience while you navigate through the website. Out of these, the cookies that are categorized as necessary are stored on your browser as they are essential for the working of basic functionalities of the website. We also use third-party cookies that help us analyze and understand how you use this website. These cookies will be stored in your browser only with your consent. You also have the option to opt-out of these cookies. But opting out of some of these cookies may affect your browsing experience.
Necessary Always Enabled

Any cookies that may not be particularly necessary for the website to function and is used specifically to collect user personal data via analytics, ads, other embedded contents are termed as non-necessary cookies. It is mandatory to procure user consent prior to running these cookies on your website.