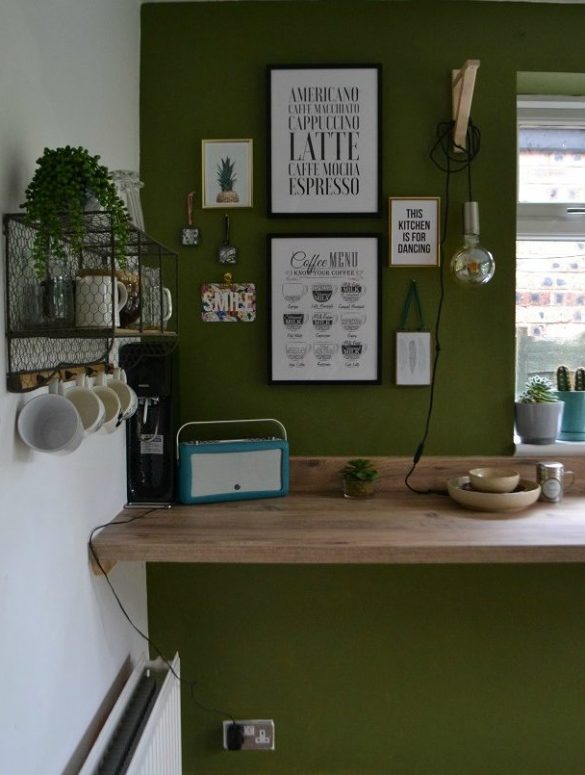 Bringing a Coffee Bar Vibe to my Kitchen 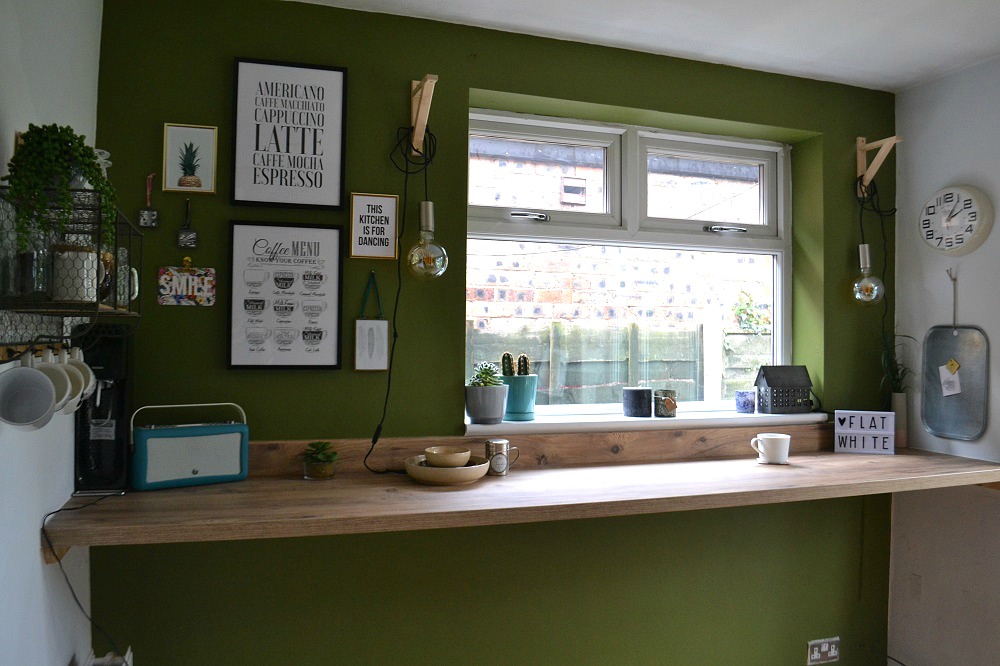 I love visiting a nice coffee shop, don’t you?  But more often than not it’s a case of dashing in and grabbing a takeaway cup, without the luxury of sitting and enjoying the experience.  As I mostly work at home, I thought it would be really fun to create a little space where I can sit and enjoy a latte (and an occasional cupcake) when I need a break. 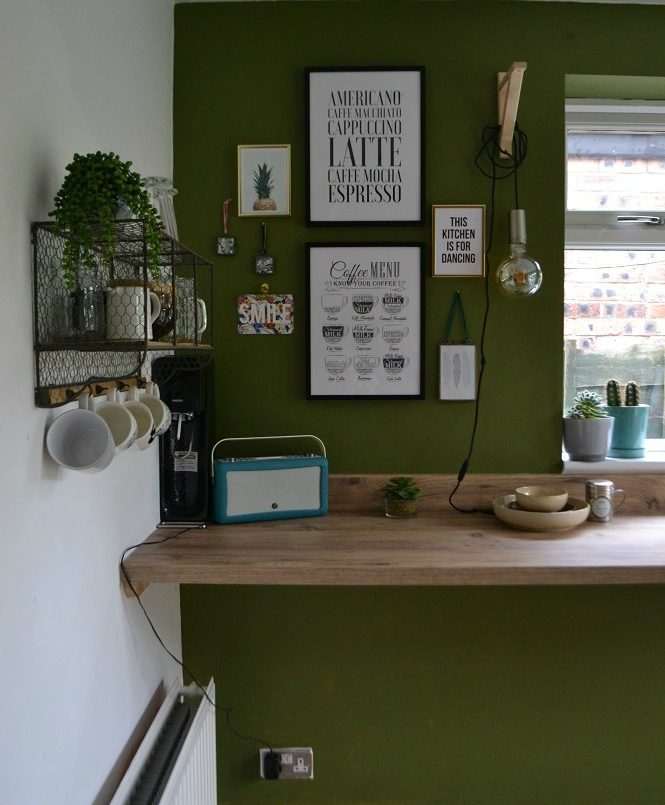 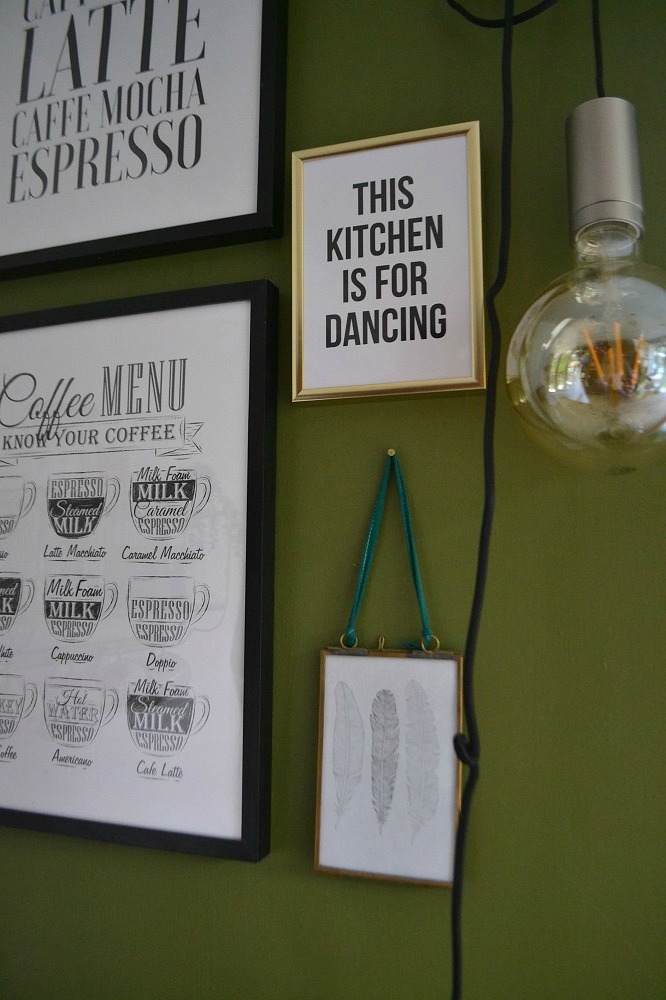 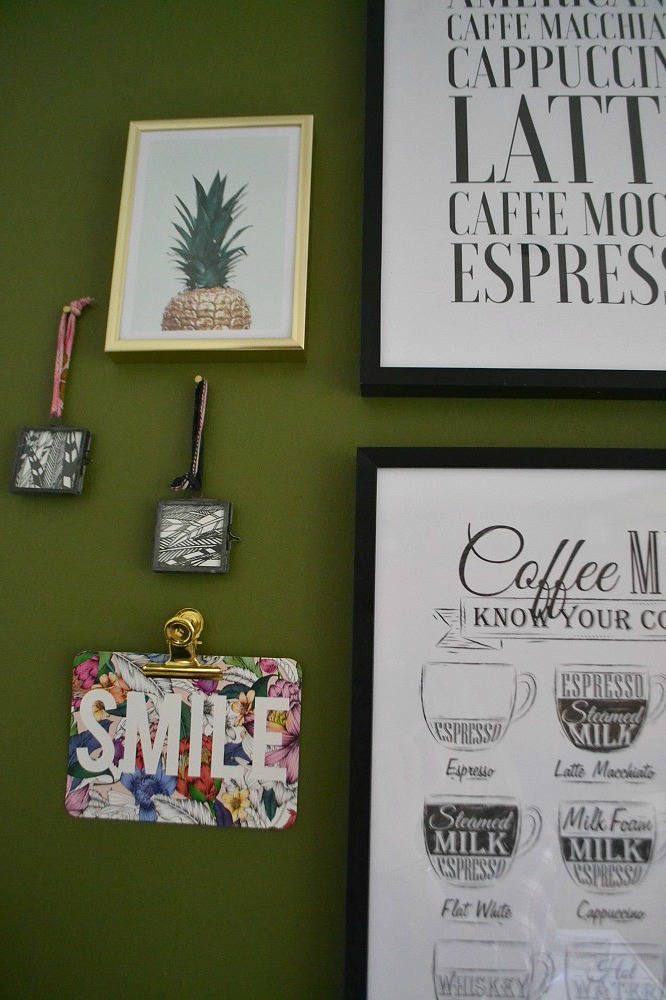 Let me introduce you to a corner of our kitchen.  Weirdly we’ve never really known what to do with this area – it is a square extension, making what is essentially a gallery kitchen a bit bigger, but we’ve struggled to make the most of it over the years.  Our rectangular oak dining table is too big for the space, we also tried a small sofa in here with a coffee table and it was even my workspace for a while.

It’s funny how things come full circle, though, as originally when we moved into this house nearly 13 years ago it had a long counter under the window with bar stools.

Back then it felt kind of redundant as it was just the hubby and me with our toddler, Alex, who was turning 3 (I can hardly believe he’s a big strapping teenager now) – and it never really got used so we took it out. 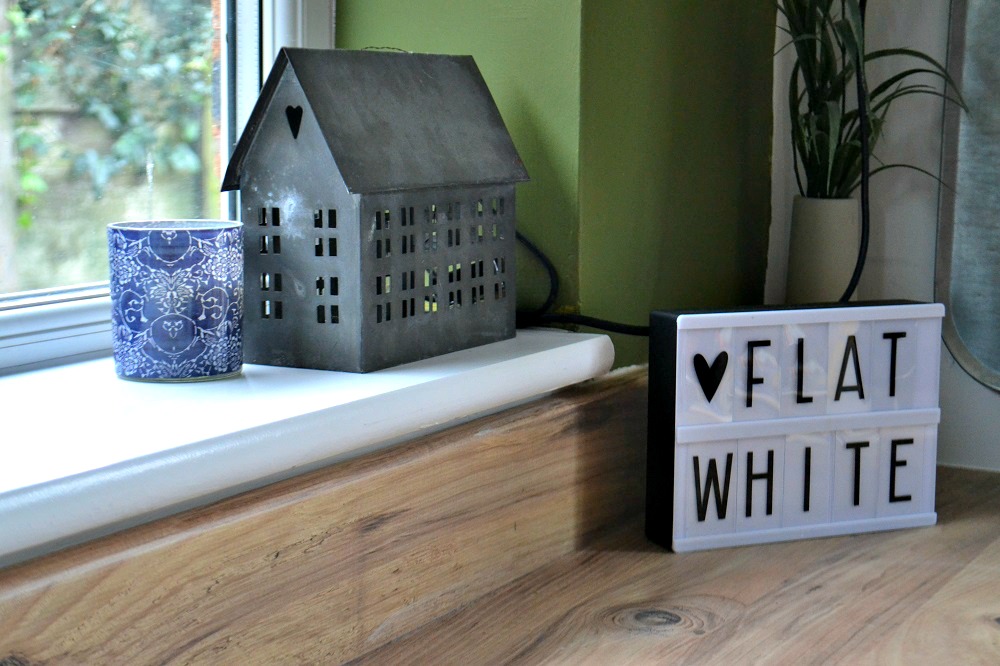 Now, of course, with three growing lads we realised it would be useful to have something similar back in place, so decided to reinstate it, but with added coffee shop chic. 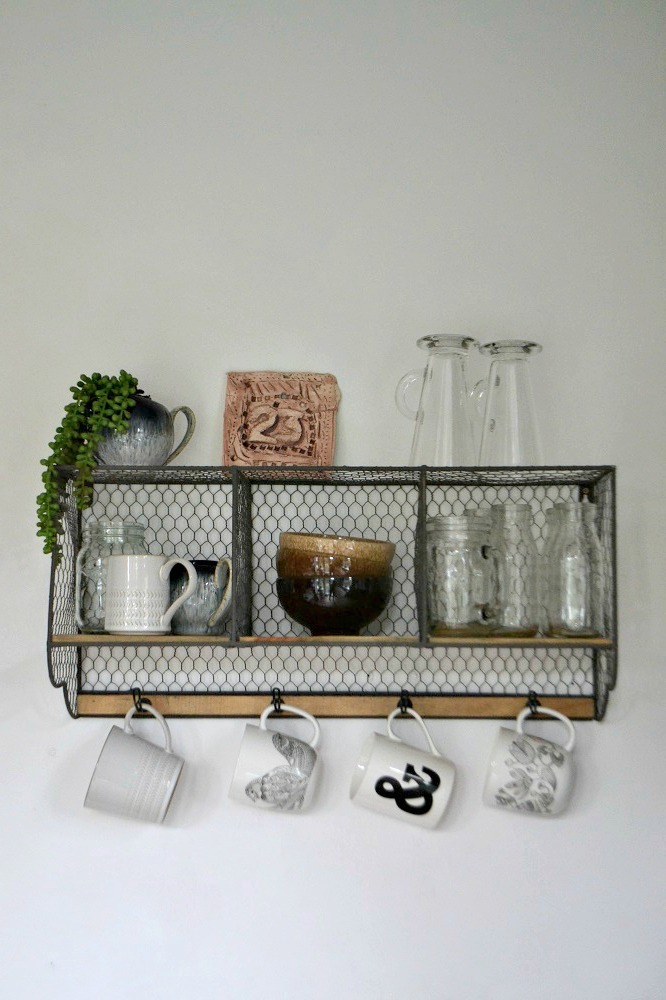 When you think of a trendy coffee bar it’s all reclaimed wood and metal tables, large windows, industrial pendant lights etc.  My original idea was to use scaffold boards to make a really rustic counter top.  But practically, I wasn’t sure if the surface would be a bit too rough and difficult to keep clean.  So I began a search for a really authentic looking wood effect laminate and came across a company called WilsonArt.  I was not aiming to match the rest of the kitchen counters which are faux black granite – I wanted this coffee area to have its own distinct look, separate to the rest of the room, but hopefully complimentary.  The counter needed to be raised higher than the other worktops anyway if we were going to use it with bar stools.  The WilsonArt worktop is called ‘Mississippi Pine’ and  I think is pretty epic; it has all the texture and grain I was hoping for and is a lovely natural colour, too.  We opted for the matching upstand which gives a smart finish to the counter. 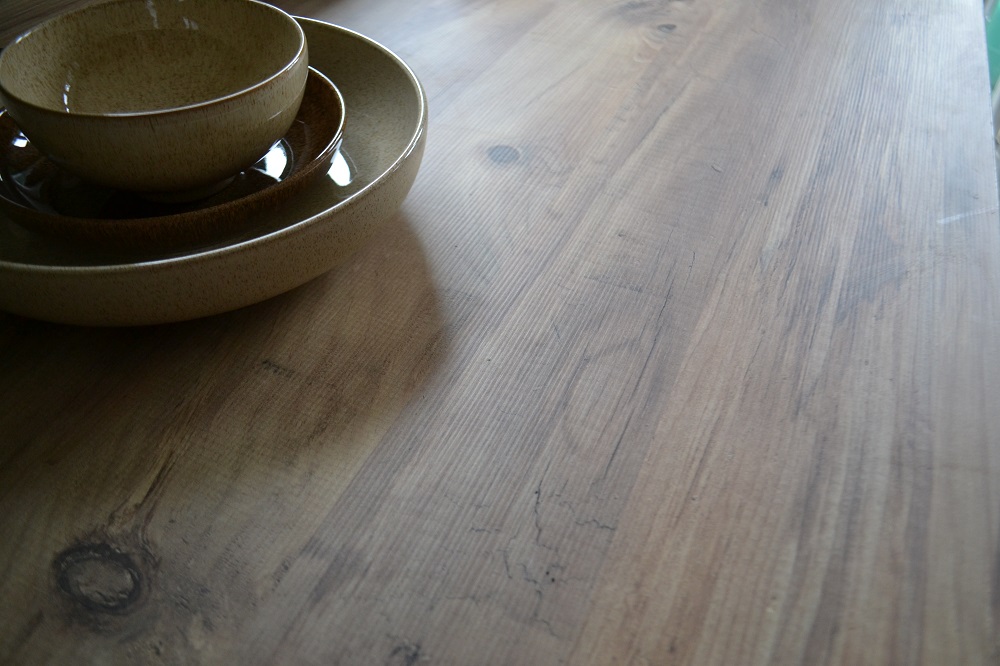 The other change I wanted to make here was adding a rich wall colour.  I considered deep blue or plum, but decided to go for green, as I intended to bring in some plants and thought it would feel nice and natural against the wood effect counter. 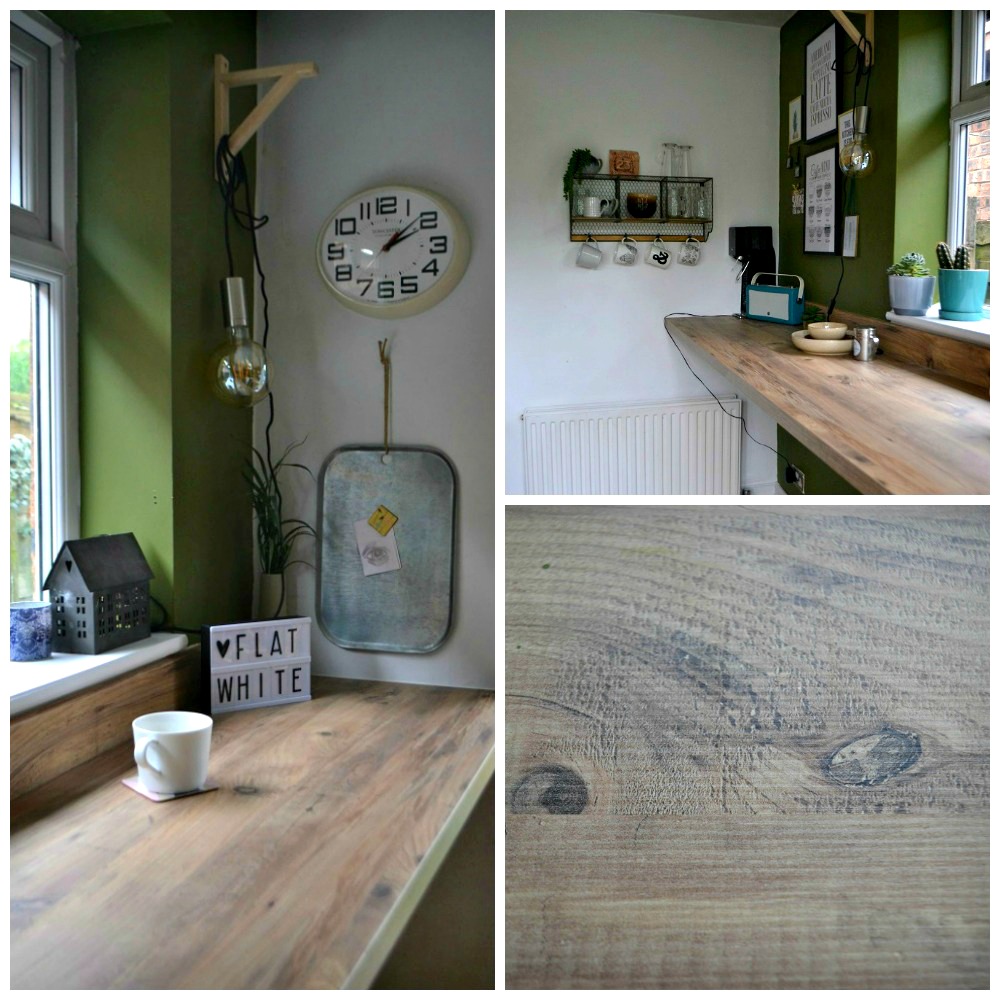 The paint is Valspar  and the colour choice was tough!  I must have stood in B&Q comparing and contemplating green swatches for a good half an hour.  The shade I finally opted for is called Salty Peat, a kind of mossy, olive green and at first I wasn’t too sure about it, it looked a bit like pea soup – but once the second coat went on and having lived with it for a couple of weeks I’m sold! 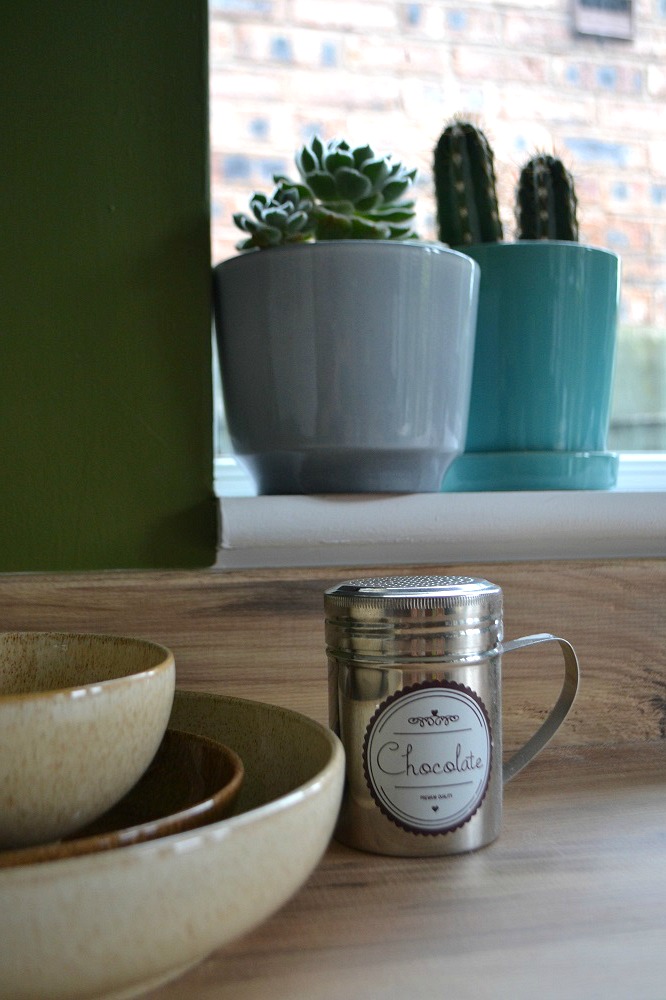 Bar stools are a key part of this project but I haven’t got any yet, unfortunately.  I will likely opt for a classic Tolix style or similar industrial design.

The oversized hanging bulbs I relocated from our bedroom, they were from Clas Ohlson originally.  Most of the wall art I sourced a while back from Desenio, so the only other thing missing along with the stools is a funky barista style coffee machine – on my wishlist!  Once the bar stools and coffee making facilities are in place I’ll definitely give an update! 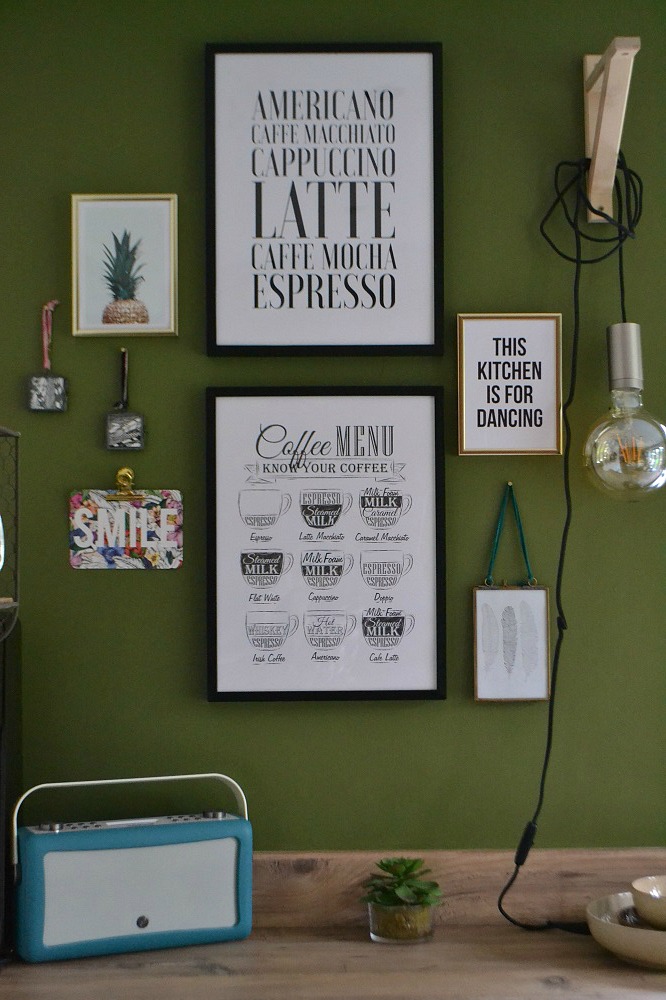